Anthony Watts
|
Posted: May 11, 2020 10:58 AM
Share   Tweet
The opinions expressed by columnists are their own and do not necessarily represent the views of Townhall.com. 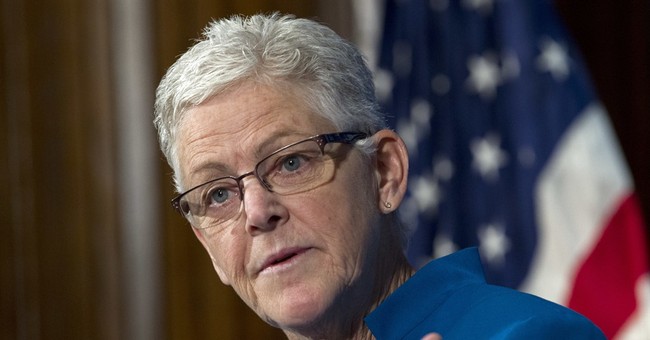 Sometimes, you just have to wonder if it’s ignorance or simply pure mendacity that drives former EPA administrator Gina McCarthy and Michael Bloomberg to make claims like this: “How Trump’s EPA Is Making Covid-19 More Deadly.”

Putting aside their anti-Trump bias and just looking at the science, their claim fails miserably on several levels. First, we have the Harvard study the op-ed was based on, which claims that stricter EPA emissions restrictions would reduce COVID-19 deaths.

This isn’t a study of real people and real pollution, it’s a computer-generated model. That alone should give you pause, given how badly coronavirus models have botched the short-term predictions used to push and justify drastic public policy measures, such as statewide lockdowns.

For example, there’s the Institute for Health Metrics and Evaluation (IHME) model from the University of Washington. On April 8, IHME reduced the total number of needed hospital beds to 166,890, down from the 262,092 it had predicted less than a week earlier. The projected intensive care unit hospital bed requirement over that same week was cut in half, to 19,816 on April 8, down from 39,727 on April 2. The projected need for ventilators also fell by nearly half, to 16,845.

On March 26, IHME issued a press release claiming, “New COVID-19 forecasts: US hospitals could be overwhelmed in the second week of April by demand for ICU beds.” That model prediction clearly didn’t happen. Hospitals weren’t overwhelmed, even in big cities, and field hospitals and hospital ships brought in to handle “the surge” are no longer considered necessary.

So much for model projections of COVID-19 severity. That’s strike one.

Third, we have the overlooked fact that during the massive economic shutdown, air pollution in the United States has been drastically reduced due to closure of industry, fewer cars on the road, and almost no air traffic. This is based on real measured data, not a computer model. This resulted in huge and unprecedented drops in PM2.5 particulate air pollution (a standard for soot pollution below 2.5 microns in size) in many cities around the world. Even CNN admitted: “Major cities that suffer from the world’s worst air pollution have seen reductions of deadly particulate matter by up to 60% from the previous year, during a three-week lockdowns period.”

And don’t forget, many Americans are now wearing masks that filter out PM2.5. This reduces the impact of air pollution even further.

Even normally smoggy Los Angeles had clean-air headlines on April 6, with CNN reporting, “Los Angeles had the cleanest air of any major city in the world on Monday.”

But wait, what happened to the supposed increase in air pollution and the claims by McCarthy and Bloomberg? They claimed, “A recent Harvard study shows that even a tiny increase in fine particulate matter air pollution—commonly known as ‘soot’—increases death rates from Covid-19.”

Moreover, they alleged, “Despite this danger, the Trump administration has launched a series of attempts to make our air dirtier and harder to breathe.” What actually happened so far is the exact opposite of those claims. That’s strike three. Their wild, partisan claims of doom are out, and the game should be over.

Finally, by the time the economy gets rolling again, America will likely have left COVID-19 largely behind us, thanks to social distancing and the disinfecting power of summer heat and sunlight.

Anthony Watts is a Senior Fellow for Environment and Climate at The Heartland Institute and is a former television meteorologist. He operates the most viewed website in the world on climate, the award-winning website wattsupwiththat.com.