They Don't Call It 'The Great Tweet of China'

Ann Coulter
|
Posted: Sep 20, 2017 12:01 AM
Share   Tweet
The opinions expressed by columnists are their own and do not necessarily represent the views of Townhall.com. 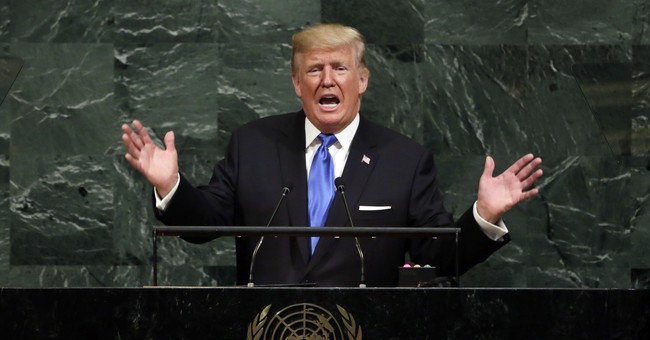 During the campaign, Donald J. Trump made lots of promises -- he'd be the greatest jobs president God ever created, he'd cut taxes, he'd balance the budget, he'd give all Americans fantastic health care, he'd renegotiate NAFTA, he'd scotch the Iran deal and so on.

But there was one central promise without which he wouldn't have been elected: He said he'd build a wall.

Either Trump understood the urgency of our border crisis, as his every campaign speech suggested, or it was just meaningless boilerplate to get himself elected. If it was the latter, then our search continues for one politician who won't lie to us.

It was precisely the Nietzschean Eternal Recurrence of politicians promising to get tough on immigration, but never, ever doing it, that caused voters to cling to Trump like a life vest in a tidal wave.

If Trump actually believed what he claimed to believe, he would treat the building of a wall as a far more urgent priority than sending FEMA after a hurricane.

Taking nothing away from the fine people who lost their lives in the recent hurricanes, since the 2005 hurricane season, about 200 Americans have died in hurricanes, plus 82 in Hurricane Harvey and 50 in Hurricane Irma.

That's 332 deaths from hurricanes in the past 12 years.

Even a federal government determined not to tell Americans how many illegal immigrants are committing crimes admits that -- at a minimum -- there are 350,000 illegal immigrants incarcerated in state prisons and jails, and 3,500 are in for murder.

Considering that the average time served for murder in America is six years, that means that, in the last 12 years, hurricanes have killed 332 Americans, and illegal immigrants have killed 7,000 Americans.

Throw in the more than 30,000 Americans who die every year from heroin and fentanyl brought in by Mexicans, and illegal immigration is a problem at least 100 times more urgent than Hurricanes Harvey, Irma and every other hurricane since 2005, combined.

(If we're including U.S. territories and Hurricane Maria ends up killing another 100 people -- current estimates are zero dead -- illegal immigration is still 80 times worse than the last 12 years of deadly hurricanes. Of course, if we're including territories, then we also must note that illegal immigration is especially disastrous for Puerto Ricans living in the U.S., in terms of crime and diminishing job prospects.)

There is no question but that illegal immigration dwarfs any other issue, not only in dead Americans, but also in welfare expenditures, taxes, lost jobs, police and prison expenditures, declining neighborhoods, ruined schools, overwhelmed hospitals, facial reconstruction surgeries and rape counseling services, to name a few costs.

We thought Trump understood this. We were counting on him to fight for us on the border -- not with rallies, not with hats, not with tweets, but by building a wall.

And yet, as of Wednesday this week, Trump will have been in office 243 days without having begun the wall. Imagine if Hurricanes Harvey and Irma had hit 243 days ago and all we'd gotten from the president were assurances that FEMA would be coming any day now -- just as soon as he got the go-ahead from Mitch McConnell and Paul Ryan! (Or worse, from Nancy Pelosi and Chuck Schumer.)

The more accurate analogy would be if Trump responded to the recent hurricanes not only by sending zero federal aid, but also by demanding that we dismantle FEMA and the National Hurricane Center. That's exactly what he's doing by proposing we respond to the crisis of 40 million illegal aliens in our country with an amnesty that will lure another 40 million across the border.

We hoped we wouldn't have to spell it out. We thought Trump understood that this was an emergency. We believed he was capable of getting the job done.

If he did understand, then 243 days ago, he would have sent the Navy Seabees and Army Corps of Engineers to start building the wall.

For most of the nation's history, the primary job of the military -- of which President Trump is the commander in chief -- was building walls and fortresses on our borders. That's why we have an Army Corps of Engineers. It may not seem like it from recent history, but the job of our military is to protect America's borders -- not Ukraine's borders, not Jordan's borders.

This is our one and only chance to get this done, and we're losing the fight. While Trump dallies, last week California became a sanctuary state. Sixteen-year-old girls are taking lessons to learn to be safe drivers, but when they're smashed into by drunk-driving illegal aliens, the state won't tell ICE, and taxpayers will spend $40 million to pay for their defense.

The wall has to get built, and nothing else matters.

Obviously, it suits the rest of the traitorous GOP -- which ferociously opposed him -- to pretend that Trump's election had nothing to do with immigration.

I don't know about a lot of things. I don't know where women let you grab them if you're a rich celebrity. I don't know how to play a wind instrument. But when everyone else said Trump was a joke, I said, nope, he's going to be our next president. If anyone is telling Trump that a "virtual wall," drones, a conga line or a "Don't Cross!" sign are as good as a wall, he can get his stock tips from them, but not his political advice.

If Trump doesn't get that wall built, and fast, his base will be done with him and feed him to Robert Mueller.