No Facts, No Peace 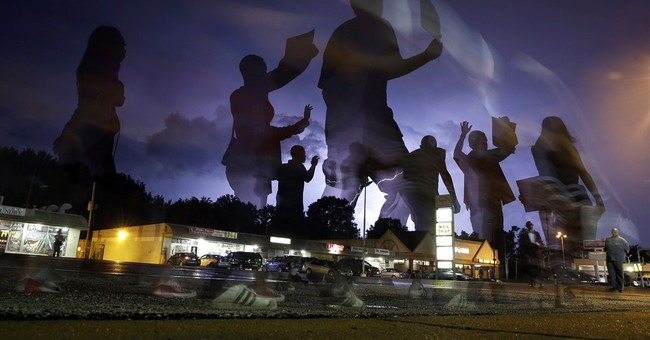 It's important to remember that, in police shooting cases like the one in Ferguson, Missouri, the initial facts are often wrong. You don't want to end up looking like Rich Lowry, National Review editor, whose March 23, 2012, column on the Trayvon Martin shooting was titled, "Al Sharpton Is Right."

Early accounts are especially unreliable when reporters think they have a white racism story. Stirring up racial hatred is how journalists make up for sending their own kids to lily-white private schools.

As detailed in my book Mugged: Racial Demagoguery from the Seventies to Obama

, the old media's standard for any police shooting of a black person is: "Racist until proved innocent." We got three-alarm racism stories for the shootings of Jose (Kiko) Garcia, Eleanor Bumpurs, Michael Stewart and Edmund Perry.

And then it turned out Garcia was a drugged-up coke dealer who pulled a gun on the cop, Bumpurs was a psychotic who came at the cops with a machete, Stewart fought the cops so violently he gave himself a heart attack, and Perry mugged an undercover cop.

Witness statements aren't always 100 percent accurate. In Garcia's case, innumerable neighbors gave the media florid accounts of Officer Michael O'Keefe beating and kicking Garcia, before repeatedly shooting the unarmed man in the back as he lay facedown on the floor. The Garcia family lawyer assured The New York Times that "this kid never was arrested; he wasn't a drug dealer."

It later turned out that Garcia was a convicted felon.

He had a gun the night of the shooting.

The autopsy proved he was not shot in the back, nor was he beaten.

The only eyewitnesses against Officer O'Keefe were drug dealers -- for whom Garcia worked -- who could not possibly have seen anything from their vantage point, as confirmed with a laser pointer used by the Garcia family lawyer.

The first headlines in the Edmund Perry case were:

The New York Times: "HONOR STUDENT, 17, IS KILLED BY POLICEMAN ON WEST SIDE."

Two dozen witnesses -- many of them black -- established that Perry had mugged the cop and was stomping on him when the officer shot him. Those witnesses were the heroes, not elite news anchors, who leave their doorman buildings to rail against "racism" from well-guarded studios or brief reporting forays to black neighborhoods.

Follow-up stories admitting that some sensational racist crime turned out to be false are never a high priority with the press.

After all the media's hysteria about the Kiko Garcia shooting (New York Newsday: "COP SHOOTING VICTIM: HE WAS SHOT IN THE BACK") the story just faded away.

That incident provoked riots that resulted in one person dead, 90 injured, 53 policemen hospitalized, 121 vehicles torched, 11 police cars damaged, and dozens of businesses burned or looted. But when the early accounts turned out to be lies, the media whispered the ending and tiptoed out of the room, as if reading a bedtime story to a child.

The old media just love creating huge racist hoaxes -- which has done so much to improve the lives of ordinary black people!

Luckily for America, especially African-Americans, the advent of alternative media has reduced the Non-Fox Media's ability to stir up urban riots. Today, it's possible to get information that never would have seen the light of day in the 1980s.

In less than two weeks, the original version of the racist police execution of Michael Brown -- or "Big Mike" -- has already undergone major revisions. We were told:

Then we got the store surveillance video of him robbing a liquor store and manhandling the clerk. Perhaps Big Mike committed his first-ever crime 11 minutes before his encounter with Officer Darren Wilson, but it doesn't look good.

At least two autopsies now establish Big Mike was not shot in the back.

-- He didn't touch the police officer.

This week, we saw the X-ray of Officer Wilson's fractured eye socket.

-- He was holding his arms up surrendering when Officer Wilson shot him.

That's at least in doubt now that a video of a Big Mike supporter has emerged, capturing the private conversation of an eyewitness confirming the officer's claim that Big Mike was running at him.

On the tape, one black man tells another:

"Him and the police was both in the truck, then he ran -- the police got out and ran after him ... Then the next thing I know he comes back toward the truck 'cause -- the police had his gun drawn already on him. The police kept dumping on him, and I'm thinking that the police missing ... but he kept coming toward him."

Some would say a private conversation, unintentionally recorded immediately after an event, is more credible than alleged eyewitness accounts by people who know they're talking to the press.

But if MSNBC can spend six months on a bridge closure in Fort Lee, New Jersey, they can probably do at least a year on a police shooting in Ferguson, Missouri.