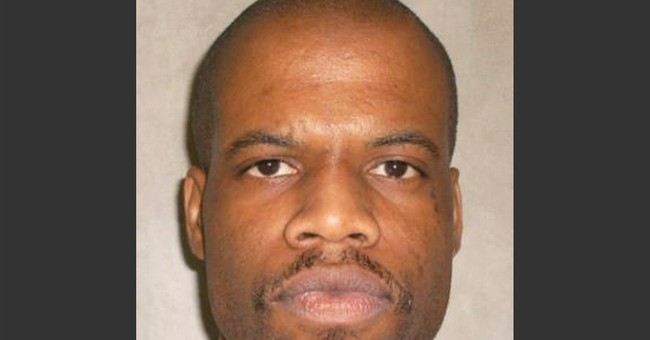 The next time liberals get indignant when we say they care more about criminals than the victims of crime, remember their hysterical weeping over Clayton Lockett. I refer, of course, to the vile rapist-murderer, whose execution last week is getting more press than Chris Christie's bridge scandal.

This week we will review some facts about the case that The New York Times edited out of its capacious articles on Lockett. This is the information that was not fit to print. Next week, we'll discuss the death penalty, with particular reference to Clayton Lockett.

The main category of facts you won't read about Lockett in the Times, or elsewhere in the NFM (Non-Fox Media), is what he did to his victims -- which is to say, his last four victims. It may surprise you to learn that Locket had a long felony record.

In 1999, Lockett and two confederates broke into Bobby Bornt's house to rob him. Bornt recognized Lockett as the man he had hired a few weeks earlier to cover a tattoo.

Lockett savagely beat Bornt for 15 minutes with a shotgun, as Bornt's 9-month old son wailed in the next room. The three men bound Bornt's hands together with duct tape and set about searching his home for something to steal. Indeed, Lockett pushed Bornt off the couch, complaining that he was bleeding too much into what he called "my couch."

About that time, Bornt's friend, Summer Hair, showed up to invite him to a party. The thieves pulled her inside, threw her against a wall and hit her, holding a gun to her head until she called her friend waiting in the truck outside, to tell her to come inside. That was Stephanie Neiman.

Stephanie walked in, and she, too, was beaten until she relinquished the keys to her truck. All three victims were locked in the bedroom with Bornt's infant child, while Lockett and Co. ransacked the home, pausing only to pull Hair out and gang-rape her. One of Lockett's crew orally sodomized her, then vaginally raped her. Lockett raped her vaginally, anally and orally.

Lockett directed one of his conspirators to steal a shovel from Bornt, loaded them all up in Bornt and Neiman's trucks and drove to a remote area. Lockett took Hair from one of the trucks and again raped her vaginally and orally. He returned her to the truck, where the third man forced her to perform oral sex on him.

Lockett demanded that his victims promise not to tell the police what he had done. Bornt and Hair promised, but Stephanie would not, so he yanked her out of the truck and directed one of his confederates to start digging a grave.

(He later told the police that he wanted to kill all three adult victims so that his parole officer wouldn't find out he had left the county.)

Stephanie stood by the grave being dug for her for 20 minutes. Lockett shot her, but his gun jammed. So he walked back to the truck to fix it, listening to Stephanie cry, "Oh God! Please! Please!" The three men laughed at her.

Then he returned and shot her again. But Stephanie was still breathing -- so Lockett told the others to bury her anyway. She coughed as dirt was heaped on her face. She was buried alive.

Lockett warned Bornt and Hair that they'd be murdered, too, if they went to the police, then drove them back to Bornt's house. Bornt and Hair reported the rapes, kidnapping and murder the next day. One of Lockett's accomplices quickly confessed and brought the cops to Stephanie's body.

These facts are not contested by Lockett, who, as he wrote in a letter from prison, "told that fool" -- the district attorney -- "I did shoot that bitch."

All four adults who lived through the evening with Lockett "snitched" on him -- his two co-conspirators, as well as the two victims. (For this, he strove mightily from prison to orchestrate hits on all four of them -- letters that came in handy during his clemency appeal!)

A jury sentenced Lockett to death, but he lived for another 15 years after committing these savage crimes, during which time he was fed, housed and given medical treatment by the generous people of Oklahoma.

In addition to plotting hits against the four witnesses against him, while in prison, Lockett repeatedly threatened guards, was caught with homemade weapons, destroyed prison property, and threw feces and urine at officers bringing him food.

When called to account for his attack on one prison guard, he explained, "F-ck this kangaroo court, next time it will be a knife." Four days later, he was caught with an 11-inch shank and 23-inch club in his cell.

Another time, when a homemade shiv was found on Lockett, he told the officer, "You know that I could have stuck this in your f-cking heart."

Lockett was so violent that other prisoners refused to be housed in the same cell with him, even though they could be punished for their refusal.

In letters from prison, Lockett said that he planned to "put a bullet in" Bornt. He wrote to his aunt -- the mother of one of his accomplices -- warning her that his "homeboys" in prison are "waiting on him."

Lockett also planned to kill his ex-girlfriend, of whom he said, "She was gone" (going to) "get done real, real bad! And she still is. Her ass better get the fucc out of Perry" (Oklahoma) "cause my little brother coming down here from San Diego and niggaz think I was crazy then wait till cuzz get here! He already on the run from New Orleans for murder."

New York Times editors may not have slept well after Lockett's execution, but Bornt, Hair and about a dozen other specific individuals surely did.

In letters to the under-sheriff, Lockett bragged about his gang affiliations, his previous crimes and his intention to murder Bornt and Hair. "Cuzz Im a California Hoover Crip!" he says. "We don't get down at all like these Hooverz from Oklahoma. Why you think so many niggaz beat cases out that way? Cause Im an assassin -- point blank!"

This is the murderer whose recent execution has thrown liberals into deep despair.