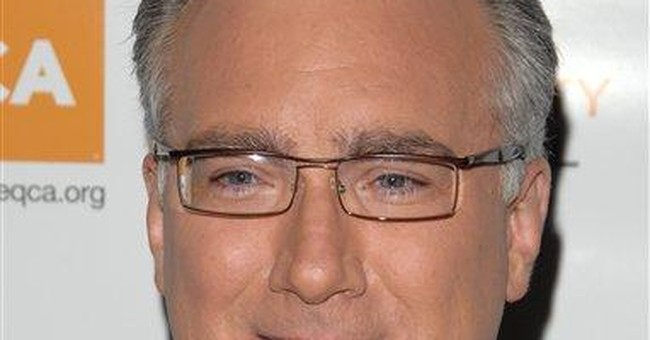 MATTHEWS: Everybody agrees he could handle everything today. ...

OLBERMANN: It almost felt like watching the stories of John L. Sullivan, the 19th-century boxer, who would volunteer to fight anybody and everybody in the house and knock them all out. ...

MADDOW (imagining Obama thinking): You've brought a pet issue here, congressman, who is the ranking member of the Budget Committee, let me tell you 400,000 things about it, and invite you to continue the discussion with me later. ...

MATTHEWS: (T)oday showed me that we do produce probably the best candidate and best president we can in this system you can imagine in the world. ...

OLBERMANN: They had 140 players on the field and the other team had one guy and they lost to him. ...

MATTHEWS: You were so unbelievably hot, Mr. President! You blew away the other team!

Unlike the jock-sniffers, normal people watching the president's tete-a-tete with the Republicans only wondered why Obama always responds to imaginary arguments no one made, rather than the questions actually being asked.

That is Obama's signature move: Invent "people" who are "saying" ridiculous things and then encourage the audience to laugh at these made-up buffoons.

Since Obama's reformulations of Republican arguments are always absurd, no further response from him is necessary -- and none is ever forthcoming.

Thus, for example, Obama's description of Republican criticism of his plan to nationalize health care was that "this thing was some Bolshevik plot."

No. No one said it was a "plot," Bolshevik or otherwise.

Republicans' objection to national health care could be more accurately portrayed as follows: Obama's plan to nationalize health care was a terrible idea because it would turn over one-sixth of the American economy to Washington bureaucrats, who would run the system as competently as the federal government runs everything else, from airport security to the post office to FEMA.

How about responding to that argument? (And as long as Obama brought it up, can he explain which part of national health care the Bolsheviks would have objected to most strongly?)

This isn't how adults conduct serious political debates; it's how children argue with their parents. Don't have a cow! Liberals hide conservative arguments from the public like teenagers hide contraband from mother under the bed.

Repeatedly positing imaginary attacks by Republicans accusing him of a "plot," Obama said that "the way these issues are being presented by the Republicans is that this is some wild-eyed plot to impose huge government in every aspect of our lives."

Again, not a "plot" and certainly not "wild-eyed." The only person accusing anyone of "plotting" here is Obama accusing the GOP of plotting against him. I guess they don't teach irony at Harvard Law School.

If Obama is going to keep imagining others accusing him of "plots," could he provide just one example?

Republicans also did not accuse Obama of trying to "impose huge government in every aspect of our lives." Just the part of it that determines how long we get to live.

Continuing his fantasy battle with imaginary opponents, Obama said, "What you've been telling your constituents is, this guy is doing all kinds of crazy stuff that's going to destroy America."

I gather Obama is incapable of responding to his opponents' actual argument, which is that he is proposing all sorts of things that would be very bad for America.

He told Republicans he was "absolutely committed" to working with them, "but it can't just be political assertions that aren't substantiated."

Can Obama please name a single "unsubstantiated" political assertion by a Republican before wasting everyone's time by instructing Republicans to stop making them?

I can name a few from Obama!

How about the whopper he told about national health care not covering illegal aliens? Or the one about it not covering abortions?

Weeks after Obama made those unsubstantiated political assertions before a joint session of Congress, Democrats were in death-match battles with Republicans (and some moderate Democrats) who tried to exclude coverage for illegals and abortion from the very bills Obama said never contained such coverage in the first place.

How about Obama's claim in his State of the Union address last week that a recent Supreme Court ruling would allow "foreign corporations to spend without limit in our elections"?

In the case Obama mentioned, the court overruled section 441a of the campaign-finance law, which had banned all corporate spending on elections. The case did not concern, nor did the court address, section 441e, which prohibits foreign corporations from making any "contribution or donation of money or other thing of value ... in connection with a Federal, State or local election."

History will record that these remarks from his State of the Union address were the only case legendary barrister Barack Obama ever argued before the Supreme Court. And he lost.

Even when presented with a short, straightforward, simply stated question by Rep. Mike Pence, Obama couldn't help but to formulate a different question.

The question Obama wanted Pence to ask was: Mr. President, will you join Republicans in cutting taxes of billionaires?

Luckily, Obama's reformulation gave him an opening for a killer answer: "What you may consider across-the-board tax cuts could be, for example, greater tax cuts for people who are making a billion dollars. I may not agree to a tax cut for Warren Buffett."

Republicans should take that answer and run like a thief in the night! OK, let's cut taxes on everyone except billionaires. I'd even support a specific tax expressly on Warren Buffett. Now, son, how much will you give us for these magic beans?

If only Republicans could maneuver Obama into answering a question on abortion, we could probably get him to agree to ban all abortions --- except in the case of teenage girls who have been raped by their fathers. (This is how I assume Obama would rephrase the question.)

No conservative argues like this. To the contrary, we're morose that Nexis archives are not more complete, so we can't quote liberals directly more often.