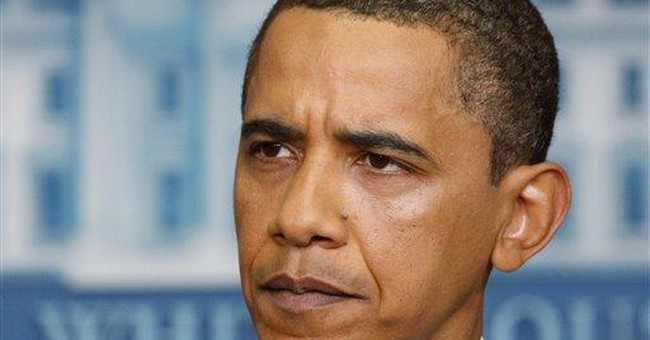 On Iran, President Obama is worse than Hamlet. He's Colin Powell, waiting to see who wins before picking a side.

Last week, massive protests roiled Iran in response to an apparently fraudulent presidential election, in which nutcase Mahmoud Ahmadinejad was declared the winner within two hours of the polls closing. (ACORN must be involved.)

Obama responded by boldly declaring that the difference between the loon Ahmadinejad and his reformist challenger, Mir Hossein Mousavi, "may not be as great as advertised."

Maybe the thousands of dissenters risking their lives protesting on the streets of Tehran are doing so because they liked Mousavi's answer to the "boxers or briefs" question better than Ahmadinejad's.

Then, in a manly rebuke to the cheating mullahs, Obama said: "You've seen in Iran some initial reaction from the supreme leader" -- peace be upon him -- "that indicates he understands the Iranian people have deep concerns about the election."

Did FDR give speeches referring to Adolf Hilter as "Herr Fuhrer"? What's with Obama?

Even the French condemned the Iranian government's "brutal" reaction to the protesters -- and the French have tanks with one speed in forward and five speeds in reverse.

You might be a scaredy-cat if ... the president of France is talking tougher than you are.

More than a week ago, French president Nicolas Sarkozy said: "The ruling power claims to have won the elections ... if that were true, we must ask why they find it necessary to imprison their opponents and repress them with such violence."

But liberals rushed to assure us that Obama's weak-kneed response to the Iranian uprising and the consequent brutal crackdown was a brilliant foreign policy move. (They also proclaimed his admission that he still smokes "lion-hearted" and "statesmanlike.")

As our own Supreme Leader B. Hussein Obama (peace be upon him) explained, "It's not productive given the history of U.S.-Iranian relations to be seen as meddling."

You see, if the president of the United States condemned election fraud in Iran, much less put in a kind word for the presidential candidate who is not crazy, it would somehow crush the spirit of the protesters when they discovered, to their horror, that the Great Satan was on their side. (It also wouldn't do much for Al Franken in Minnesota.)

Liberals hate America, so they assume everyone else does, too.

So when a beautiful Iranian woman, Neda Agha Soltan, was shot dead in the streets of Iran during a protest on Saturday and a video of her death ricocheted around the World Wide Web, Obama valiantly responded by ... going out for an ice cream cone. (Masterful!)

Commenting on a woman's cold-blooded murder in the streets of Tehran, like the murder of babies, is evidently above Obama's "pay grade."

If it were true that a U.S. president should stay neutral between freedom-loving Iranian students and their oppressors, then why is Obama speaking in support of the protesters now? Are liberals no longer worried about the parade of horribles they claimed would ensue if the U.S. president condemned the mullahs?

Obama's tough talk this week proves that his gentle words last week about Ahmadinejad and Iran's "supreme leader" (peace be upon him) constituted, at best, spinelessness and, at worst, an endorsement of the fraud.

Moreover, if the better part of valor is for America to stand neutral between freedom and Islamic oppression, why are liberals trying to credit Obama's ridiculous Cairo speech for emboldening the Iranian protesters?

The only reason that bald contradiction doesn't smack you in the face is that it is utterly preposterous that Obama's Cairo speech accomplished anything -- anything worthwhile, that is. Not even the people who say that believe it.

The only reaction to Obama's Cairo speech in the Middle East is that the mullahs probably sighed in relief upon discovering that the U.S. president is a coward and an imbecile.

Two weeks ago, New York Times columnist Thomas Friedman was exulting over the "free and fair" national election in Lebanon, in which the voters threw out Hezbollah and voted in the "U.S.-supported coalition." (Apparently support from America is not deemed the vote-killer in Lebanon that it allegedly is in Iran.)

To justify his Times-expensed airfare to Beirut, Friedman added some local color, noting that "more than one Lebanese whispered to me: Without George Bush standing up to the Syrians in 2005 ... this free election would not have happened."

But Friedman also placed a phone call to a guy at the Carnegie Endowment for International Peace -- which he didn't have to go to Lebanon for -- to get a quote supporting the ludicrous proposition that Obama's Cairo speech was responsible for the favorable election results in Lebanon.

"And then here came this man (Obama)," Mr. Carnegie Fund said, "who came to them with respect, speaking these deep values about their identity and dignity and economic progress and education, and this person indicated that this little prison that people are living in here was not the whole world. That change was possible."

I think the fact that their Muslim brethren are now living in freedom in a democratic Iraq might have made the point that "change was possible" and "this little prison" is "not the whole world" somewhat more forcefully than a speech apologizing for Westerners who dislike the hijab.

Obama -- and America -- are still living off President Bush's successes in the war on terrorism. For the country's sake, may those successes outlast Obama's attempt to dismantle them.

US vs. Russia: Watch These Two Military Recruitment Videos and You'll Quickly See Why We're 'So Screwed'
Leah Barkoukis
Kamala Harris Under Fire For Supporting Border Closure She Once Opposed Under the Trump Administration
Leah Barkoukis
Maryland State Employee Under Investigation After She Was Caught Making an Absurd Comparison About Cops
Matt Vespa
Back Online: Colonial Pipeline Now Operational...But There's a Catch
Matt Vespa
Wow: Ohio Announces $1 Million Prizes for Five Randomly-Selected Vaccinated Residents
Guy Benson
Even When They Try to Get It Right, Democrats Ultimately Get It Wrong on Standing Up for Israel
Rebecca Downs