In Europe, Fed Up Voters Send Message to EU Superstate

Andreas Hellmann
|
Posted: Jun 17, 2019 2:13 PM
Share   Tweet
The opinions expressed by columnists are their own and do not necessarily represent the views of Townhall.com. 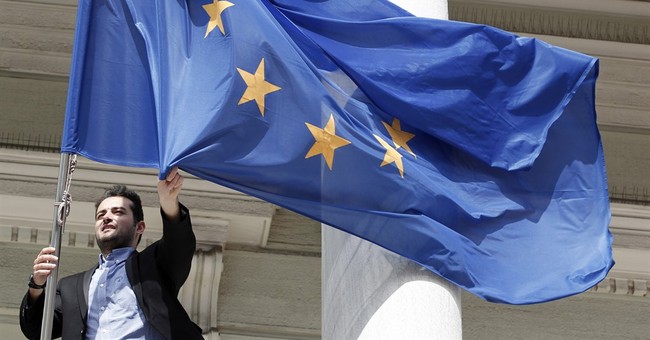 The dust has settled after the European Parliament elections, which took place in May across the 28 European Union member states. Often it is difficult to describe the outcome of an election with one word. This time it's different. Voters were fed up with an arrogant, bloated superstate bureaucracy. They voted to get their sovereignty back.

After the ban of high-powered vacuum cleaners the EU proposed a ban on some models of household appliances like toasters as a part of the European Commission’s  eco-design restrictions. EU regulations have also restricted the sale of incandescent light bulbs and banned bananas with -- according to Brussels bureaucrats -- malformations or an abnormal curvature.

The mainstream media is currently in denial by only covering the success story of the ultra-left Green parties. They rarely mention the long term rise of Eurosceptic forces that are fighting for a European Union of strong nation states, against an ever-growing EU budget and bureaucratic European superstate.

For decades EU politics has been dominated by the two major big bloc parties, the center-right European People's Party (EPP) and the center-left Progressive Alliance of Socialists and Democrats (S&D).

The two parties claim to be different, but both represent the establishment committed to a business-as-usual approach that always increases the size and scope of EU bureaucracies. The same is true for the revolving head of the European Commission.

Voters punished the two major bloc parties with huge losses. The EPP and S&D lost almost a fifth of their seats.

What is already happening across the continent in many European member states is finally arriving at the EU level as well. The big parties find themselves under an enormous amount of pressure. Take a look at Germany: The Social Democrats received only 15%, and Merkel's CDU scored only 28%, losing over 7% compared to 2014.

The European Union is divided, and so are the member states.

It is essential to mention that the voter turnout was very high: At more than 50% across Europe, it was the highest in two decades. So why did more and more voters abandon those old, established parties?

Two topics were decisive for those elections: anti-EU bureaucracy and among left wing voters, “climate change.”

Neither the EPP nor the S&D could win voters with those topics. For Greta Thunberg-climate change type of voters, those parties were not radical enough on the issue of climate change, and for the anti-establishment voters, the two parties are the core of the problem of EU waste, regulation and overspending. The two groups of voters have one thing in common: They both wanted to end more of the same old, same old.

Fragmentation will define the new European Parliament. The clear winners of these elections are the anti-establishment parties. Politicians and the mainstream media are in denial about it. Whether one likes it or not, the long-term trend clearly shows that Eurosceptic forces are on the rise.

In Italy, The League won over 33%, in France Marie Le Pen's National Rally Party won with 23% more votes than Macron's ruling party. In Austria, the Austrian Peoples Party scored 35%, and Austria's Freedom Party 17%. Germany's Alternative für Deutschland won over 11%, and in Hungary, Viktor Orban's Fidesz party won over 52% on a hardline anti-immigration platform. It is also crucial to mention the success of the newly formed Brexit party, winning over 30% in the UK.

Those parties are fighting for a European Union of strong nation-states, a slimmer European Union with less bureaucracy and fewer regulations interfering with people's lives.

It is clear, however, that after these European Parliament elections the duopoly of the establishment parties is over.

Andreas Hellmann is Program Manager at Americans for Tax Reform.