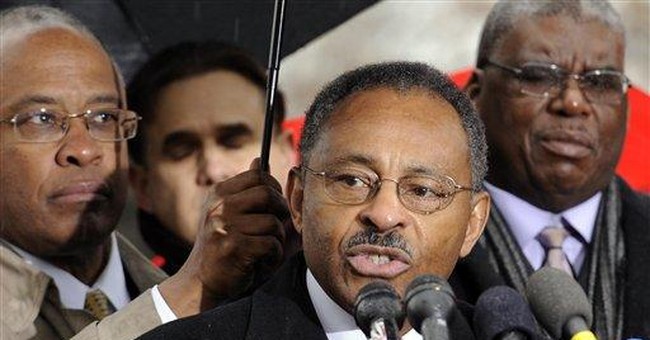 Democratic leadership indicated that disgraced Gov. Rod Blagojevich’s nod for Roland Burris to Barack Obama’s vacated Senate seat will be approved despite worries about the “tainted” nature of the appointment.

There was no telling, however, how soon Burris might be formally appointed as senior Democrats sought to establish some initial requirements for the action to be taken.

Senate Majority Leader Harry Reid (D.-Nev.) said he was examining “options” to seat Burris a day after Burris was turned away from the Senate and excluded from the 111th’s freshman class swearing-in ceremony.

After a 45-minute meeting with Burris, which Reid described as "enlightening", the Leader said, "There is going to come a time when the entire Senate is going to have to act on this," most likely in the form of a full floor vote.

Illinois senior Sen. Dick Durbin (D.) outlined a three step process for the appointment to move forward. First, he said leadership would wait to determine whether or not the Illinois Supreme Court the Illinois Secretary of State is required to certify the appointment, which the Secretary has refused to do. Then, Burris should face questioning about his relationship with Blagojevich would be an "important step in the process." (Burris will formally testify before the Illinois State Legislature Thursday.) Finally, Durbin said the Senate Rules Committee should review the procedure and make a final recommendation to the body.

President-elect Obama seemed amendable to the news. After the news broke that Reid was warming up to the appointment, Obama told reporters Burris “is fine public servant. If he gets seated, I will work with Roland Burris just as I work with all the other senators, to make sure that the people of Illinois and the people of the country are served.”

Senate Democrats initially said they would refuse to approve Roland, citing authority to determine the chamber’s membership and a lack of proper certification from the Illinois Secretary of State who has refused to sign-off on the appointment. Their arguments, however, did not appear to meet constitutional muster which says senators may only reject another senator based on lack of constitutional qualification.

Democratic leadership said they would refer the appointment to the Rules Committee for clarification, but Rules committee Chairman Sen. Dianne Feinstein (D.-Calif.) has already said Gov. Blagojevich was, indeed, entitled to name Burris as senator.