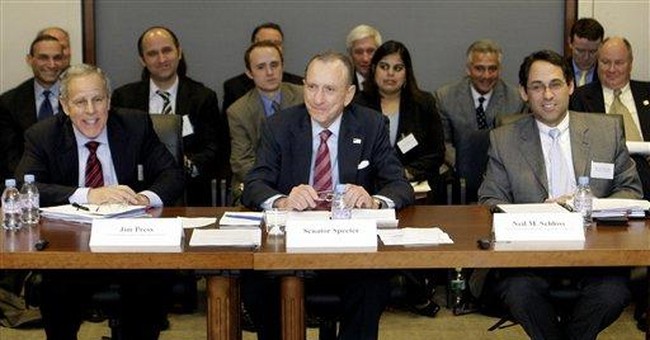 Officials from General Motors, Chrysler and Ford are using words like “catastrophic” and “depression” to describe the nation’s economic future if lawmakers refuse to give their companies a bailout.

Each of the Big Three CEO’s told Congress last month their companies required a massive infusion of tax dollars in order to keep operating and insisted they would not consider bankruptcy. They were sent home with instructions from Democratic leadership to come up with their own specific bailout plans that will be presented to Congress on Thursday.

GM submitted a 37-page to Congress in advance of CEO Rick Wagoner’s testimony to justify the $18 billion their company is seeking is assistance on Tuesday. Their proposal said “Absent such assistance, the company will default in the near term, very likely precipitating a total collapse of the domestic industry and its extensive supply chain, with a ripple effect that will have severe, long-term consequences to the U.S. economy.”

The report went on to say, “A failure by GM would trigger catastrophic damage to the U.S. economy” that would leave up to 3 million Americans jobless.

GM’s report, like Chrysler’s and Ford’s, read like a business proposal. It went to great lengths to explain all of the negative impacts of business failure, but gave no attention to the economic impacts of forcing taxpayers to keep failing companies alive.

Chrysler’s Vice Chairman James Press told the Associated Press in an interview “If we have a catastrophic failure of one of these car companies, in this tender environment for the economy, it's a huge blow. It could trigger a depression." Chrysler officials say more than 200,000 of their employees would lose their jobs immediately if their company was liquidated

His company is seeking $7 billion in government loans.

Ford officials are asking for a government line of credit worth $9 billion. Their 37-page plan to Congress says their company’s economic outlook is closely tied to GM and Chrysler’s. “Nearly 25 percent of Ford's top dealers also own GM and Chrysler franchises,” it said. “That is why the collapse of one or both of our domestic competitors would also threaten Ford.”