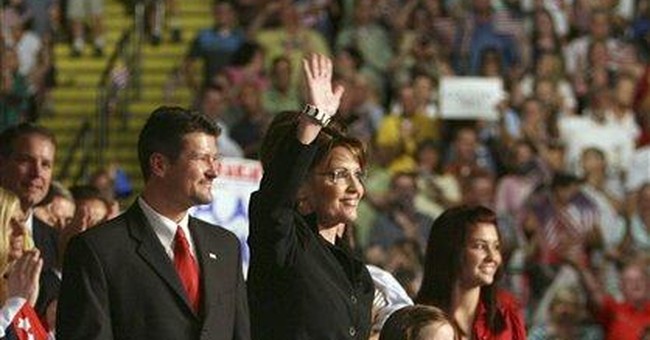 John McCain’s newly-minted vice presidential candidate Sarah Palin revealed her daughter, Bristol, is 5 months pregnant amid intense rumors the governor “faked” her pregnancy earlier this year to cover an out of wedlock child.

"Our beautiful daughter Bristol came to us with news that as parents we knew would make her grow up faster than we had ever planned. We're proud of Bristol's decision to have her baby and even prouder to become grandparents," Sarah and Todd Palin said in the brief statement released by the McCain campaign.

"Bristol and the young man she will marry are going to realize very quickly the difficulties of raising a child, which is why they will have the love and support of our entire family," the Palins said.

Ever since Palin was tapped to become McCain’s VP rumors have been swirling on the internet that her son Trig, a child with Down’s Syndrome, was actually her grandson.

A blogger at the DailyKos, ArcXIX, wrote a vitriolic post titled "Sarah Palin is NOT the Mother" that accused Bristol, a fit-looking adolescent teen, of having a "baby bump" in a photo they allege was taken March 9th of this year.

"Sarah, I'm calling you a liar" wrote blogger ArcXIX. "And not even a good one. Trig Paxson Van Palin is not your son. He is your grandson. The sooner you come forward with this revelation to the public, the better. "Photos of Bristol with detailed commentary about her abdomen are contained in the post. The photo was actually taken by the Anchorage Daily News in 2006. Baby Trig was born on April 18, 2008. The logistical timeline of a 9-month pregnancy, however, didn’t stop the lefty bloggers from pushing the story. Neither did other photos of a visibly pregnant Palin taken closer to the date she gave birth.