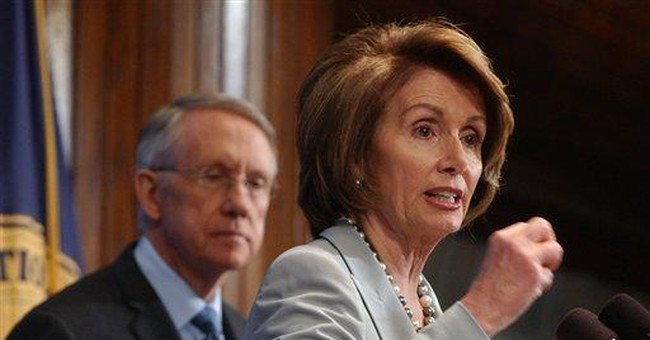 “While a very small band of your colleagues remain on the House floor to discuss gas prices, their constituents deserve to know why their representatives in Congress have failed to support serious, responsible proposals,” she wrote in a letter to GOP Minority Leader Rep. John Boehner (Ohio.).

“We cannot drill our way out of this problem,” she said.

The Speaker adjourned last week amid loud cries from the GOP who wanted to end the day with routine, 5 minute speeches. Most of Republicans were planning to use the time to criticize Pelosi for letting the House go into recess without doing anything to increase the domestic energy supply through offshore drilling.

Rather than let the Republicans do that, Pelosi unexpectedly turned off their microphones, ordered CSPAN cameras to shut down and dimmed the House’s lights. Rather than go home, a cabal of Republicans refused to leave and spoke to visiting tourists about gas prices from the darkened House floor.

House Republicans will continue their protest this week and possibly the month, although the House is technically closed.

Pelosi reacted to GOP presidential candidate John McCain’s calls for Congress to return to session to pass offshore drilling legislation in a separate statement released by her office the same day as her letter to Boehner.

She criticized McCain for being “absent from the Senate during critical votes to cut subsidies for Big Oil” and said Democrats “will continue to demand that the President release oil from our nation’s stockpile to provide immediate relief in 10 days, unlike the McCain-Republican-Big Oil plan that lowers prices at the pump by 2 cents in 10 years.”

Like Democratic presidential candidate Barack Obama, Pelosi supports releasing a portion of the government’s Strategic Petroleum Reserve, originally created to be used in the event of a national emergency, to bring down energy prices.