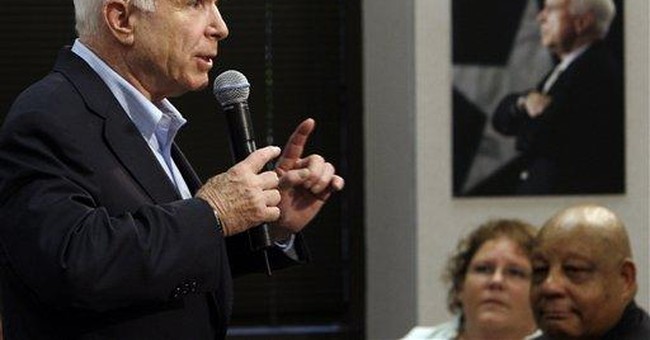 GOP presidential candidate John McCain indicated he’d like to give immigration reform another try at the National Council of La Raza’s annual meeting in San Diego.

There, McCain stressed his newly-held priority of border enforcement before discussions about granting legal status to illegal immigrants. “We must prove we have the resources to secure our borders and use them while respecting the dignity and rights of citizens and legal residents of the United States. When we have achieved our border security goal, we must enact and implement the other parts of a fair, practical and necessary immigration policy.”

McCain’s Democratic rival, Barack Obama, spoke at the conference Sunday. He used the occasion to highlight McCain’s push for border security, a move he made through the Republican primaries with strong encouragement from his GOP base. Obama said, “McCain used to buck his party on immigration by fighting for comprehensive reform – and I admired him for it. But when he was running for his party’s nomination, he abandoned his courageous stance… we need to offer those who are willing to make amends a pathway to citizenship."

McCain said he would not attack Obama in his NCLR speech, but said “I feel I must, as they say, correct the record.” He reminded listeners, “At a moment of great difficulty in my campaign, when my critics said it would be political suicide for me to do so, I helped author with Senator Kennedy comprehensive immigration reform, and fought for its passage.”

In previous visits with Hispanic immigration groups, like the League of United Latin American Citizens and the National Association of Latino Elected and Appointed Officials, McCain did not speak this frankly about his work to advance McCain-Kennedy, instead sticking mainly to themes about economics and trade.

McCain seemed especially warm towards NCLR at points of his speech, praising them on their work to provide mortgages to Hispanics and build charters schools in Latino communities.

He also thanked NCLR’s former CEO Raul Yzaguiree, who was Democratic presidential candidate Hillary Clinton’s lead immigration adviser, for “over twenty years of friendship and counsel he has so generously given me.”