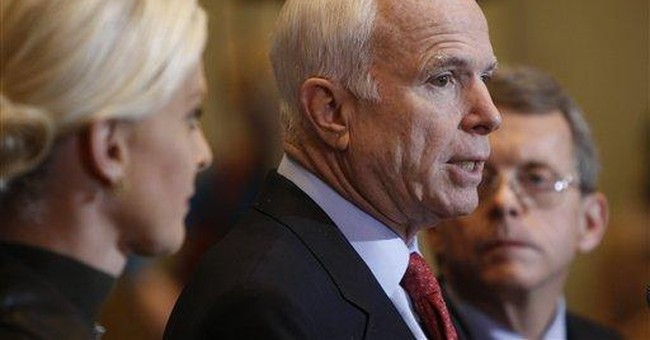 GOP presidential hopeful John McCain lashed out against the New York Times for publishing a front page story his campaign characterized as “gutter politics” in a press conference Thursday morning.

The story suggested McCain had a romantic, unethical relationship with a young, female lobbyist named Vicki Iseman. The 3,000 word story, titled “For McCain Self-Confidence on Ethics Poses Its Own Risk,” is largely unsourced and rehashes details of the Keating Five scandal.

“I’m very disappointed in the New York Times piece, it’s not true,” McCain said with his wife by his side. He said Iseman was a “friend” who he saw on occasion at public events, like fundraisers. “I have many friends in Washington who represent various interests and those who don’t and I consider her a friend,” McCain said.

“Obviously people who represent interests are fine, that’s their constitutional right, but the question is access or unwanted influence and certainly no one ever has in my conduct or my public life and the conduct of my legislative agenda,” McCain stated.

The story said that, “according to two former McCain associates, some of the senator’s advisers had grown so concerned that the relationship had become romantic that they took steps to intervene” and “A former campaign adviser described being instructed to keep Ms. Iseman away from the senator at public events, while a Senate aide recalled plans to limit Ms. Iseman’s access to his offices.”

“All of this is quote anonymous sources and quote former aides,” McCain said. “You know the staff of the Committee is around 100, 150 staff members. It was one of the largest staffs in many committees so both former aides and former staffers could certainly encompass a large number of people.”

The New York Times published the story on their website Wednesday evening and it was quickly linked by the Drudge Report. McCain campaign spokeswoman Jill Hazelbaker immediately issued a statement that described the piece as “gutter politics.”

It said: “It is a shame that the New York Times has lowered its standards to engage in a hit and run smear campaign. John McCain has a 24-year record of serving our country with honor and integrity. He has never violated the public trust, never done favors for special interests or lobbyists, and he will not allow a smear campaign to distract from the issues at stake in this election.”

Bennett said, “I'm in a pretty unique position to talk about John McCain. First, I should tell your listeners I'm a registered Democrat, so I'm not on his side of a lot of issues. But I investigated John McCain for a year and a half, at least, when I was special counsel to the Senate Ethics Committee in the Keating Five, which, by the way, this ‘New York Times’ article goes back to and discusses, goes back years and years. And if there is one thing I am absolutely confident of, it is John McCain is an honest and honest man. I recommended to the Senate Ethics Committee that he be cut out of the case, that there was no evidence against him, and I think for the ‘New York Times’ to dig this up just shows that Senator McCain's public statement about this is correct. It's a smear job. I'm sorry.”