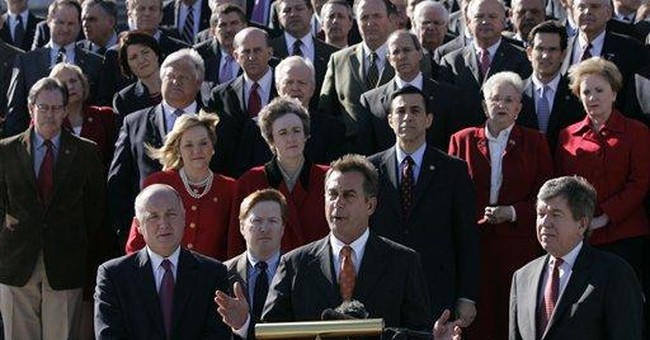 The House of Representatives left for a full week of President’s Day recess without authorizing a law that permits the government to monitor terrorist communications that will expire Friday night.

President Bush pleaded with the House to quickly pass the Senate version of the Foreign Intelligence Surveillance Act reauthorization that was agreed upon with bipartisan support, but House Democratic Leadership refused to call a vote on it.

“Failure to act would harm our ability to monitor new terrorist activities and could reopen dangerous gaps in our intelligence,” President Bush warned in a press conference early Thursday afternoon.

Instead of working on FISA legislation in the final day of congressional work before President’s Day recess, Democratic House leadership scheduled a lengthy debate that culminated in a late-afternoon vote on charges of contempt against White House aide Josh Bolton and former White House counsel Harriet Miers.

House Republicans were so outraged that FISA would be left to lapse, they staged a walkout before the contempt vote.

Since the New York Times broke a story in late 2005 that found the Bush administration had engaged in covert surveillance activities with cooperation from phone companies like Verizon, AT&T, and BellSouth, a debate has erupted, largely on party lines, over whether or not to protect those companies from prosecution under the Foreign Intelligence Surveillance Act. Disputes over the phone companies’ decision to cooperate with government requests has resulted more than 40 multi-billion dollar lawsuits.

Director of National Intelligence Mike McConnell wrote in a Washington Post op-ed Friday, "we are already losing capability due to the failure to address liability protection."

The Senate version of FISA reauthorization would grant immunity to those phone companies, but liberal Democrats in the House were staunchly opposed to doing so. Democratic Chairman of the House Permanent Select Committee on Intelligence Rep. Silvestre Reyes (Tex.) wrote in a letter to President Bush on Thursday, “I see no argument why the future security of our country depends on whether past actions of telecommunications companies are immunized.”

House Speaker Rep. Nancy Pelosi argues that a FISA lapse “does not mean that surveillance activities will cease” but the White House says otherwise.

White House press secretary Dana Perino says Pelosi is wrong. Perino explained in a release that if FISA is not reauthorized, “The Attorney General and the Director of National Intelligence would be stripped of power to authorize new certifications against foreign intelligence targets, including international terrorists, abroad.”