Allen West
|
Posted: Feb 03, 2021 10:26 AM
Share   Tweet
The opinions expressed by columnists are their own and do not necessarily represent the views of Townhall.com. 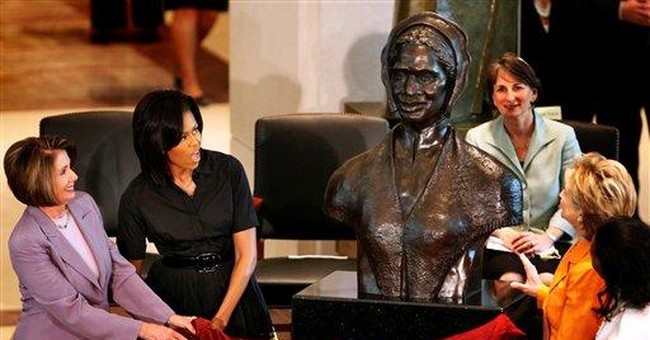 While we all recognize the names of Harriet Tubman, Frederick Douglass and Martin Luther King, Jr., from our studies of Black History Month, there are many other African American heroes who were important in the struggle for freedom and equality but whose names aren’t as widely known. These men and women are a vital part of our nation’s religious heritage, as well, and without their contributions, we might not even have had a Martin Luther King, Jr. So, I would like to highlight a few of those here today.

Many black preachers alive today are renowned for their impressive sermon oratory, but this is nothing new in African-American history. One of the earliest American black preachers to be appreciated and respected for his sermon delivery was Rev. Harry Hosier, who was the first to preach to white audiences during the post-Revolutionary War era. He was born a slave in North Carolina and freed in Maryland toward the end of the war, but remained illiterate despite traveling with the famed leader of American Methodism Francis Asbury. This is what made his sermon delivery all the more impressive. One of his most famous sermons, “The Barren Fig Tree,” based on Luke 13:6-9, goes down in history as the first formal sermon delivered by an African American. Always humble, Rev. Hosier credited his faith in God for everything he accomplished.

Two other black pastors were instrumental in the beginning of the African Methodist Episcopal Church (AME) denomination: Absalom Jones and Richard Allen. Rev. Jones was the first African American priest in the Episcopal Church, and Rev. Allen, his lifelong friend, started the first AME church in Philadelphia in 1794, the Mother Bethel AME Church. As of 2020, the denomination now boasts 7,000 congregations and 2.5 million members. Together, they also established the Free African Society, serving black widows and orphans in need, including personally nursing many who were struck by the 1793 outbreak of Yellow Fever. They worked alongside Dr. Benjamin Rush, a fellow Christian who was a signer of the Declaration of Independence and friend of both John Adams and Thomas Jefferson. Rev. Jones twice petitioned Congress and the president in the 1790s opposing slavery, and is still honored every year with a feast day on the official Episcopal Church calendar.

Many recognize the name Sojourner Truth from their history lessons as the author of The Narrative of Sojourner Truth: A Northern Slave, published in 1850 and influential in the fight against slavery. But she was also an itinerant Methodist preacher who at six feet tall was always a commanding presence and often the only black woman in the room. After she won her freedom from slavery, she had her name officially changed from Isabella Baumfree to Sojourner Truth as a testimony of God’s call on her life to journey about the countryside sharing the truth about God to all who would listen. Known for her big, booming voice, she could capture the attention of a large, noisy room when she began to sing one of the hymns she wrote, such as this one for which she is known: “It was early in the morning–it was early in the morning, Just at the break of day– When he rose–when he rose–when he rose, And went to heaven on a cloud.”

Another powerful black preacher was Alexander Crummel, a scholar and Episcopal priest, whose education at Cambridge University was funded by abolitionists. After serving as a missionary in Liberia for 20 years, he returned to the U.S. and started the first independent black Episcopal church in Washington, D.C., in 1875. One of his most famous sermons, “Building Men,” based on I Corinthians 3:10, was prophetic in its attack against the spiritual apathy so rampant today: “There are people who would fain convince themselves that it is possible to stand in a place of utter indifference in spiritual matters; devoid of all moral responsibility. Never was there a more deceptive error framed by Satan for human ruin.”

John Jasper’s sermon “De Sun Do Move” is one of many that nets this black Baptist preacher a place in the annals of influential pastors for his command of oratory as well as his scriptural depth. He served the Sixth Mount Zion Baptist Church in Richmond, Virginia, during the latter half of the 19th century and is remembered for sermons pointing to the awesomeness of God’s perfect plan: “Fellow-sinners in ranks! Turn your back on Hell, and look toward Heaven! King Jesus cometh! — Fall in ranks! When all his elect shall mount in chariots drawn by winged horses, and be seen going up in the clouds to that blessed abode where all the houses is made of gold and the streets is paved with pearls. Amen.”

Today’s Protestant Pentecostals now number in the hundreds of millions, but had their humble beginnings as a street revival in 1906 Los Angeles, led by an African American preacher named William Seymour. Originally from Louisiana and baptized as a Catholic, he grew up attending a Baptist church before receiving additional education in the Holiness movement. When the established church leaders in Los Angeles discounted his emphasis on the spiritual gift of speaking in tongues, he launched an independent Bible study that grew into the Azusa Street Revival. This movement of God lasted several years, featuring dramatic miracles and Spirit-filled interracial worship, sparking the spread of Pentecostalism in the 20th century.

Finally, where would Black preaching be without black Gospel music? We have Thomas Dorsey to thank for his influence in this important musical genre. His father was a Baptist minister and his mother an organist, so he was exposed to both faith and song early in life. He moved from Georgia to Chicago at age 17 in pursuit of a burgeoning musical career, which led to his chance to attend the Chicago College of Composition and Arranging. After graduation, he began leading secular jazz bands before choosing to follow God’s plan for his life, using music to share the Gospel. Known as the “Father of Gospel Music,” he started the first independent publishing house for black Gospel music and founded the National Convention of Gospel Choirs and Choruses. One of his most well-known compositions, “Precious Lord,” was inspired by the grief of losing his first wife and son in childbirth in 1932, and it was later said to be Martin Luther King Jr.’s favorite song.

These are just a handful of the important black religious figures who have played major roles in shaping our unique Judeo-Christian heritage here in the United States, and to whom we owe a debt of gratitude for their faithfulness and commitment. We know they faced hardships we can’t even imagine, yet they followed God’s leadership no matter the cost. It is because of their sacrifice that we have such a vibrant and diverse church life in our minority communities today. Let us not forget to honor these unsung heroes as we celebrate Black History Month this February.

LTC Allen West (USA, Ret.) is president and CEO of The Hope Center, a 501(c)(3) incubator of Christian ministries making a global impact for God’s Kingdom. It serves as a center point for Christian activity and ministry here in North Texas, providing professional resources, ideas, mentoring and training to empower ministries to magnify their reach. Lt. Col. West is a combat veteran, former Member of the U.S. Congress, an author and speaker, and chair of the Texas GOP.