The Future for the Real American Dreamers

Allen West
|
Posted: Jul 13, 2016 1:15 PM
Share   Tweet
The opinions expressed by columnists are their own and do not necessarily represent the views of Townhall.com. 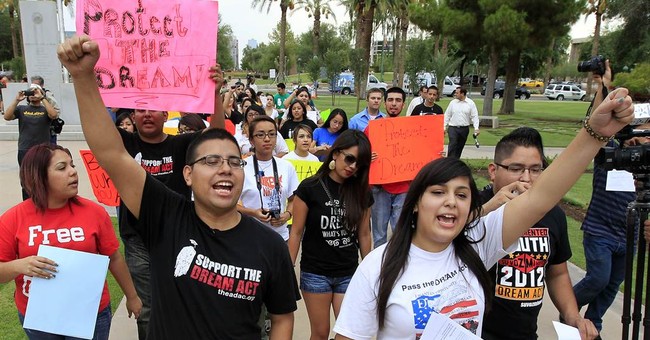 (Editors’ note: This column was co-authored by Luke Twombly)

“Tolerance is a tremendous virtue, but the immediate neighbors of tolerance are apathy and weakness” – Sir James Goldsmith

“When tolerance becomes a one way street, it leads to cultural suicide” – LTC Allen B. West (USA, Ret)

The song by Neil Diamond, “America” is one that expresses the true essence of the attainment of that which we refer to as the American dream. It is here upon these shores where one is rewarded for an indomitable, individual drive…that singular thing we call work ethic. Those are the ingredients which go into that “melting pot,” producing entrepreneurs and those seeking “the “pursuit of happiness.” They come to America, to experience and achieve the American dream.

However, what happens when a political ideology perverts language and redefines the word “dream” into a policy that is not consistent with our fundamental values and principles? Such has occurred with the term “dreamer,” as if there is only a specific, politically designated group that is searching for a dream.

All of a sudden there has been an almost Orwellian, political redefinition of a “dreamer.” Dreamers are now, as defined by the Obama administration, any illegal immigrant who claims to have come into the country before the age of 16, whom has also been here continuously for five years, and is currently under age 35. The federal government estimates that there are 1.4 million “dreamers” in the United States. Of that number, 68% are from Mexico, 13% are from Latin America or the Caribbean, and 8% are Asian.

When huge political capital is being expended to secure a desired outcome, who suffers the most?

It is our native born American children and grandchildren, and those who have come to our land legally. For some odd reason, they are not defined as “dreamers,” and even legislation signed into law dismisses their aspirations. While on the other hand, there is a group being politically elevated upon their backs -- hence the Dream Act. Fortunately, we have recently witnessed the U.S. Supreme Court ruling against President Obama’s executive amnesty and this ideologically imposed agenda.

But, is this contest over? What are the ramifications for the real American dreamers, our own sons and daughters? Half of this rising Millennial generation has adopted the bleak outlook that the American dream is dead. While the other half remains steadfast in a hope for America and its economic future. Perhaps not all is lost.

For today’s American Millennial the economic outlook is bleak. Unemployment for these real American dreamers is almost 13%. Furthermore, to exacerbate the situation, 51% of this generation are underemployed to the point of being Baristas with Bachelor degrees, certainly not the ideal circumstance for the generation taking us into the highly technical 21st century. Since 2000, 100% of net gain job creation has gone to immigrants, both legal and illegal, while the native born population accounts for 66% of population growth.

In examining the workforce participation rate, we are at a dreadful all-time low of 62.4% which translates to 94.7 million Americans not actively in the workforce. The deceptive tool of declaring the unemployment rate at 4.7% is a reflection of not counting these millions of Americans in the calculation. The denominator changes for political expediency.

For the homegrown, minority American dreamers, the statistics are dire. The millennial Hispanic unemployment rate is 13.9% and for the black community it is at an alarming 15.2%. One must ask, why would anyone place a higher value on illegal, foreign-born millennials than those who are part of the legacy representing the American ideal? It can only be explained by the fact that perhaps there are those who do not believe there is a legacy, a lineage, which has been passed down through generations in America. Or, perhaps there are those who see little value in our national sovereignty and therefore, no value in America’s cultural history and identity?

The best means by which our real American dreamers achieve their hopes is with a quality education. But, it appears the resources needed for them are being allocated elsewhere for the politically defined foreign born dreamers. Case in point: in America, English learner programs are costing between $20-$25K for each Obama administration-defined “dreamer.” Instead of these investments going toward after school education, music, arts, and vocational training programs for our children, our tax revenues are being redistributed from American dreamers to the foreign millennials.

When all is said and done, the total annual education cost for those here illegally is $52 billion. But, this does not take into account the oversized classes, over-extended teachers, and the other adverse effects on our education system.

Some will certainly deem this commentary as lacking compassion. However, what can be more dispassionate than to politically deny the dreams of our own children and grandchildren? We must ask ourselves, for what purpose?

There are those who would actually attack anyone stating these figures as xenophobic and racist. This has become a means to an end preventing anyone from bringing this topic to the discussion table. They would leverage the catch all phrase of “multiculturalism” to promote ideological uniformity -- and silence.

It is time to break the silence of apathy and weakness to secure the future for the real American dreamers.

Allen West is the Executive Director and Vice Chairman of the Board for the National Center for Policy Analysis, where Luke Twombly is a research associate.