Allen West
|
Posted: May 10, 2016 12:01 AM
Share   Tweet
The opinions expressed by columnists are their own and do not necessarily represent the views of Townhall.com. 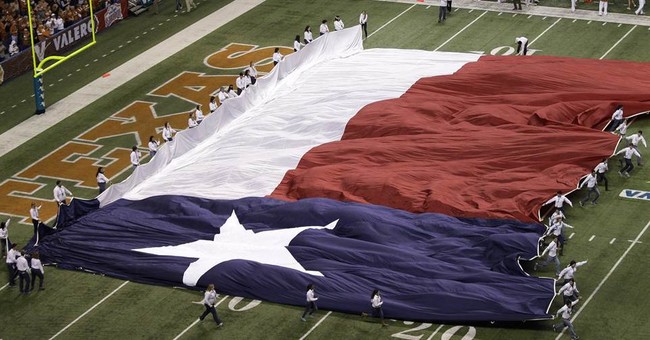 Trending
(Editors’ Note: This column was co-authored by Meloni McDaniel)

There is a saying in Texas, “I wasn’t born in Texas, but I got here as quick as I could.” That phenomena of population growth can certainly be evidenced in the Dallas-Fort Worth Metroplex. With a population boom comes increases in economic growth and expansion affecting other sectors of development. We have seen in Texas how economic growth policies can attract businesses and corporations. That results in greater demands placed upon a particular industry, particularly the construction component.

Recently, businesses such as Toyota, Liberty Mutual, State Farm, 7-Eleven, Kubota, and JP Morgan Chase have decided to relocate to Dallas-Fort Worth from outside Texas. With these major companies, there are also a plethora of small businesses -- some multi-generational and other franchises that are part of the domino effect resulting from the larger company relocations. We have seen a major population influx from both the West Coast and Northeast. There is no debate that when you look at states with pro-growth economic policies, the free market pays attention, and business decisions are based upon states and regions providing the best growth opportunities and incentives.

In the North Texas region, TEXO (the largest commercial construction association in the State of Texas) has witnessed a flood of specialty and general contractors moving into the area. There have also been an increase in specialty startups. This is creating a “trickle down” effect, and it is a positive one, as opposed to the negative outcomes from those who prefer a greater expansion of the welfare nanny-state.

According to the Associated General Contractors (AGC) of America, the national forecast for single-family residences for 2016 has grown 6% to 9%. It is easy to infer that North Texas is exceeding that estimate. AGC of America also estimates multi-family residences will grow eight to 12% in 2016. This is one of the fastest growing sectors in the North Texas area. A survey of downtown Dallas shows a major investment in mid-rise structures.

TEXO primarily focuses on local, state, and some federal governmental advocacy for the construction industry in North and East Texas, safety awareness and training, and professional development. TEXO found that the explosion in the commercial construction industry has created an employment surge of nearly 3% in the Dallas-Fort Worth area over just the past year. What this means for the state of Texas? Recent figures from AGC state that Texas has seen a $10 billion increase in non-residential construction starts to $37.7 billion over the past year.

In other words, the right economic growth policies creates an atmosphere where other sectors of industry find opportunity.

Policies that benefit business in Texas include its status as a right to work state, no personal or corporate state income taxes, a skilled workforce, and the Texas Enterprise Fund -- an economic development tool that was developed to ensure the growth and success of key industries in the state. According to the 2016 state business tax climate index, Texas is ranked tenth behind Wyoming, South Dakota, Alaska, Florida, Nevada, Montana, New Hampshire, Indiana, and Utah.

Those are major reasons why the state of Texas boasts the world’s 12th largest economy. Economic growth policies matter. Compare that with the recently released dismal GDP numbers for the U.S. -- an annual average growth of about 2.1% and, last quarter, only 0.5%. Just imagine Texas without an economic boom these past three years. AGC of America’s March 2016 economic impact of construction in the U.S. and Texas report says that Texas construction contributed $80 billion, or 4.9%, of the state’s GDP of $1.6 trillion. Because of its economic growth policies in 2014, Texas exceeded the overall national construction contribution to the U.S. GDP which was 3.8%. Imagine the adverse effect on national construction contribution to the U.S. GDP without Texas’ growth.

And, to think that in 2014 there was a movement to “Turn Texas Blue.” The seminal question is why? What would be the end result for economic growth policies in Texas if it were to mirror the states from which businesses are fleeing? It is rather perplexing that there are individuals moving from these failed state economies to Texas, not realizing the reason why companies and businesses are relocating to Texas. Why would anyone adopt a “locust mentality” of destroying the economic viability of a state, only to migrate to a more economically prosperous state, in order to create the same failing policies?

This is a major concern with the potential shifting demographics into the major urban centers in Texas, such as Dallas-Fort Worth.

The conclusion is simple. Pro-growth economic policies create a positive ripple effect and spur on additional industry expansion. The policies of the dependency state only serve to expand the government’s reach to usurp the necessary resources for economic growth. It comes down to the role of government in a free society. The greater the government intrusion, the less economic freedom and growth.

A former member of Congress, Allen West is a retired Army Lieutenant Colonel who served as a battalion commander in Iraq and is the Executive Director of the National Center for Policy Analysis in Dallas

Meloni McDaniel is President and CEO of TEXO, The Construction Association, and is the current Chair of the Ft. Worth Society of American Military Engineers Post.  McDaniel is a licensed architect in the state of Texas, and is passionate about advancing the construction industry.