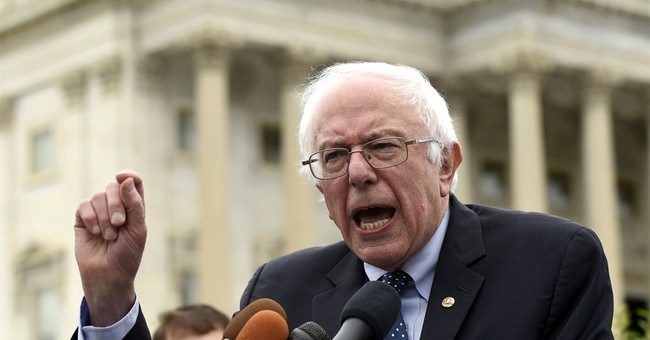 Former Prime Minister Margaret Thatcher once stated, “The problem with socialism is that you eventually run out of other people's money.” The fallacy of progressive socialists is that they believe such to not be true. It is their belief that there is a constant revenue stream emanating from the so called “wealthy” to fund the social utopianism and they leverage the mantra of class warfare in order to achieve those ends.

The liberal progressive leftists are very clever in their manipulation of language such as fair share, fairness, income inequality, and economic patriotism. Combined with a complicit liberal progressive media they are able to promulgate their message usually without any real policy challenge. Current case in point is the proposal by one avowed socialist running for the presidency, Vermont Senator Bernie Sanders. He has proposed a 90 percent income tax on “top earners.” When Senator Obama was running for the presidency in 2008 he claimed it better when we “spread the wealth around.” Of course these two astute gents are referring to the top one percent who are currently paying nearly 40 percent of overall income taxes in the United States. The estimate is that the top 10 percent of wage earners in America pay nearly 70 percent of all income taxes while there is almost 50 percent who only pay 3 percent — many receiving refunds.

This is set amid the backdrop of what is happening in Greece. There the left wing government of young Prime Minister Alexis Tsipras has just defaulted on a 1.6 billion Euro (approximately $1.66 billion) loan from the International Monetary Fund. And on Sunday, based upon PM Tsipras’ encouragement, Greece voted no to any austerity measures to assist in regaining its economic stability. This is the dream world of progressive socialist economics in that we can spend all the money we want in order to promise everything to everyone and someone else is responsible for the supplying of the monetary resources to bring the pipe dreams to fruition.

The American economic situation is not that sound either. We are currently sitting on $18.3 trillion in debt which at the beginning of the Obama administration was $10.67 trillion. The estimations are that by the time the Obama administration has run its course the American debt will sit at $20 trillion. I do not think that many grasp the gravity of the situation in that one president has created almost more debt than all previous combined. Of course President Obama castigated President Bush for being un-American/un-Patriotic for increasing the debt by far less.

But when one considers the mandatory spending side of our budget — Medicare, Medicaid, Social Security, and net interest on the debt – our actual debt with these unfunded liabilities jumps to nearly $100 trillion. And the mandatory spending side of our budget takes up approximately 63 percent of our revenues. There is no way to tax our way out of this problem. Furthermore, we are entering into very dangerous shark infested waters in that our Gross Domestic Product (GDP) is lagging behind our debt. And sadly the economic policies of the Obama administration are more focused on buying votes with the largesse of the public treasury — such as the recent overtime executive order — than growing our economy. It is as Scotsman Alexander Fraser Tytler stated, “A democracy cannot exist as a permanent form of government. It can only exist until the voters discover that they can vote themselves largesse from the public treasury. From that moment on, the majority always votes for the candidates promising the most benefits the public treasury with the result that a democracy always collapses over lousy fiscal policy, always followed by a dictatorship. The average of the world’s great civilizations before they decline has been 200 years. These nations have progressed in this sequence: From bondage to spiritual faith; from faith to great courage; from courage to liberty; from liberty to abundance; from abundance to selfishness; from selfishness to Complacency; from complacency to apathy; from apathy to dependency; from dependency back again to bondage.”

Being in gross debt is nothing more than a manner of bondage. And the objective of progressive socialist economics is to promote selfishness and envy as a means to their ends. It creates a dependency upon government largess and that ladies and gents advance the new economic plantation upon which many find themselves occupying.

The government grants free things without the inherent duty of fiscal responsibility — after all, in the dream of a social utopia, everyone is entitled, that is fairness. It is as I state the desire to advance the ideal of equality of outcomes as opposed to equality of opportunity.

Those who think the episode in Greece is far from possible in America should consider the growing list of American cities facing bankruptcy. Of course topping that list is Detroit, then we have Stockton, CA, Compton, CA, Oakland, CA, Fresno, CA, Harrisburg, PA, Providence, RI, Jefferson Co (Alabama, Birmingham), and there are others. We have states that are having their bond ratings lowered. I remember a maxim that says nothing can be stronger than the sum of its parts. If that be the case, we have many parts in our American economic structure that are failing – it could only be a matter of time, again.

The liberal progressives of the Carter administration decided everyone had a right to own a home – and created the Community Reinvestment Act. It was government’s attempt at social egalitarianism. Thirty years later, as a sum of subsequent policy missteps, the consequence was a financial collapse.

Today it is Greece, tomorrow it could be Portugal, Italy, Ireland, or Spain…and unless we restore the principles of an opportunity economy, it will be these United States of America.