There Is No Health Care Crisis 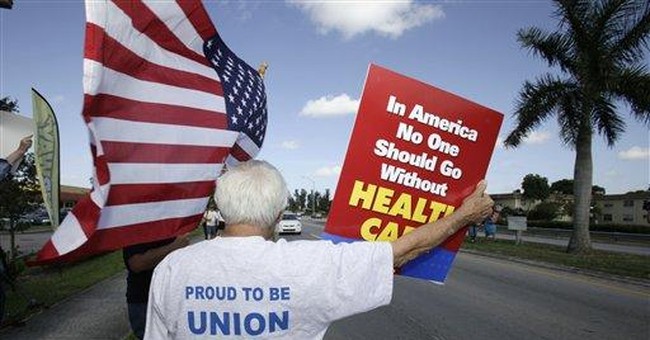 My daughter passed out at church. Seriously! It was strange and scary at the same time. She and I went to early morning mass together before dawn. We were kneeling beside each other in prayer when I heard a “BOOM!” Figuring someone had dropped a book, I opened my eyes to see my 19-year old lying like a potato sack on the floor with her eyes rolled back into her head. She was unresponsive.

Of course, I panicked. I didn't know what to do. Fortunately, a doctor was seated nearby and came over. As he began to examine her, she returned to consciousness. We eventually walked outside where a caring friend had called a medic. The ambulance arrived, and two competent medics examined my daughter with careful detail. Good news: dehydration was the culprit, and the problem could be easily solved. Crisis averted.

A “crisis” would have occurred if my daughter had passed out and there were no medics to call. In much of the world, that is a reality, and it is a true crisis. A “crisis” would have occurred if my daughter had fallen, and the medics had refused to treat her until I could demonstrate 100% ability to pay. Neither of these scenarios occurred because we live in America. Health care is abundant and available in emergency situations. Moreover, our quality of care is the envy of the world. There is no “crisis,” and the use of that term only serves to inflame passions and urge quick action on an issue that is hardly monolithic, and hardly solvable with a purely political remedy.

Unfortunately, by using the phrase “crisis” so often, our politicians risk creating a crisis rather than solving one. The dictionary defines a “crisis” in a helpful way. A crisis is “a stage in a sequence of events at which the trend of all future events, esp. for better or for worse, is determined; turning point.” It is hard to argue that “all future events” will be made better or worse if we choose to do nothing right now or we decide to take time to address meaningfully the multiple problems we face. This moment is not a “turning point,” unless of course we choose to act too quickly and without much thought, at which point we will have actually created a crisis for the worse.

In America, we have no health care “crisis.” We do have several health care “problems,” like accessibility, affordability, and inefficiency. However, we have no “crisis.” Word choice matters. “Crisis” implies that something must be done now. “Problems” recognizes that we face challenges and should proceed thoughtfully.

To be sure, our health care system faces problems. We should not lose sight of the fact that there are multiple problems. Unfortunately, our politicians like to make the solution seem easier than it actually is. Multiple problems are rarely solved by a single solution.

We have an aging population and most medical expenditures occur in the last few months of life. We have an obese population, putting great strain on resources because of obesity's propensity for leading to multiple health issues, all requiring care. We have an inefficiency issue due to the removal of the free market purchasing function and product selection from the actual consumer (the patient) in the medical transaction and the governmental dilution of the free market's pricing role in supply and demand. We have an inequity problem where some health insurance firms have not acted in good faith. We have an accessibility problem, where the poor often face significant obstacles in obtaining the quality and regularity of care that they deserve and desire.

Obviously, these problems are multi-faceted, hardly solvable with one bill passed by legislators. Perhaps, even more dangerously, we are looking at the tumor without properly recognizing the cancer strain creating it. Worst of all, we may be looking to a governmental solution for issues that are immune to, or even exacerbated by, the role of government in the first place. We may also be ignoring potential solutions that lie in sectors outside the government altogether.

For example, historically speaking, when America has faced issues of access to health care in the past, it is not the government who has come to the rescue of the poor. Often, it has been the Church. America's first hospitals were usually funded, built, and operated by the Church. In seventeenth and eighteenth century America, hospitals were desperate places, created for the primary purpose of offering care to the homeless, the indigent, and the poor. The wealthy provided for their own care. For the poor, it was people of faith who stepped up to offer aid. Such was the case with the first Pennsylvania hospital, created by William Penn and the Quakers in 1713, with the first hospital established in Brooklyn by the Methodists, and with the first hospital opened west of the Mississippi River, funded by the Catholic Church in 1828 as DePaul Hospital in St. Louis.

The legacy continues still today. Methodist hospitals are world-renowned, with leading facilities in Houston, Dallas, Indianapolis, and the hospital directly across the street from the Mayo Clinic in Rochester, Minnesota. The Catholic Health Association represents the nation's largest group of non-profit health care facilities. In fact, one in six Americans is cared for each year in a Catholic hospital. In Atlanta, the Good Samaritan Clinic, created by Dr. Bill Warren, a pediatrician who has applied his faith, offers quality care in the poorest section of the city for people with the least means to afford care. Good Samaritan served over 19,000 patients in 2008, with 90% being from the working poor or homeless populations. His clinic has inspired others to create similar facilities around Atlanta and throughout the country. Compassion and innovation have come from the private sector and the Church, not from state capitals or Washington, DC.

All this to say, if we are looking for political solutions to the health care problems, we may just be looking in the wrong direction.

First, it is important to recognize that we have health care problems rather than a “crisis.” Second, we have many problems rather than a single problem, and multiple problems require multiple solutions not a hastily implemented, monolithic mandate. Finally, to solve those problems, America should look creatively to the places that have provided compassion, mercy, excellence, and innovation in the past. One of those places is the Church.

When Mother Teresa saw the ditches and gutters of Calcutta lined with people having no access to health care whatsoever, she and the Church stepped up to meet that need. That was a crisis. What we have in America are problems.