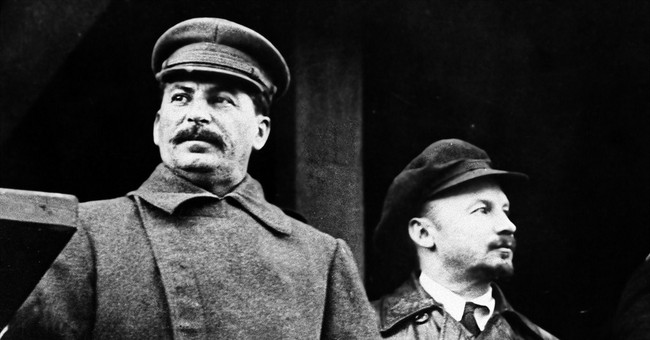 Hollywood relishes making anti-American movies, but, maybe even more, loves to lavish fulsome tributes on full-blown Communists, you know, those fellows who swooned at Joe Stalin’s feet, teamed up with Hitler as he bombed the hell out of London in World War II and worked overtime to inflict deadly harm on America.

Tinseltown is at it again, celebrating Dalton Trumbo, a major Hollywood Ten figure and longtime Communist enthusiast, in a brand new picture directed by Jay Roach and featuring Bryan Cranston, the star of the hit television series, Breaking Bad. The publicity for Trumbo says that Dalton bravely took a “stand against the Communist-witch-hunt at the height of the Cold War” and was “punished for his principled stand for free speech and the Constitution.” (Yes, we all know how Communists have always been deeply committed to America’s constitutional freedoms.) Anti-Communists like John Wayne and labor leader Roy Brewer will also be taking major hits.

The new Trumbo movie will almost certainly treat the revered screenwriter in much the same way Christopher Trumbo, Dalton’s son, treated his dad in his 2007 “documentary,” also called Trumbo. In other words, like a glorified patriot, who could not openly work in the film industry because of the “inquisition” conducted by the House Un-American Activities Committee (HUAC).

Typical of Hollywood’s take on Christopher’s film was an article by the Los Angeles Times’ Kenneth Turan, who portrays Dalton as a “contrarian” who “believed passionately in the Constitution and the Bill of Rights.” And when HUAC began to investigate his “connections to the Communist party,” his life showed “the fearsome cost of standing up for your principles...”

Ah, and what glorious principles they were! Trumbo, in truth, was a full-fledged Stalinist who had the distinction of siding with three of the most barbarous dictators in the 20th century: Joseph Stalin, Adolf Hitler and North Korea’s Kim-Il Sung. Nor did he just have “connections” to the Communist party. He was a full-blooded Red, party card and all, who worked hard to graft the Soviet system, with all its lovely qualities, upon his country of birth.

For much of his adult life, Dalton was in Stalin’s hip pocket (as, of course, was every member of the Communist party in the United States). I’ve read a lot of Trumbo and combed through his papers at the Wisconsin Historical Society in Madison. Yet I’ve never found a paragraph, or even a phrase, where he ever publicly or privately condemns Stalin’s Soviet Union in a meaningful way, certainly not when the Caligula in the Kremlin was dispatching his own citizens by the millions, egging Hitler on as he invaded the Western democracies, cheering Goering’s air force as it rained death and destruction on London and eagerly devouring Eastern Europe in the post World War II era. Not a peep of protest or regret from a man whom Hollywood longs to lionize.

The evidence of Trumbo’s Red activities is hardly secret. He came clean, sort of, to his biographer, Bruce Cook, a writer of the upcoming Trumbo screenplay. He told Cook in the 1970s that he joined the party in 1943, that some of his “very best friends” were Communists and that “I might as well have been a Communist 10 years earlier. . .” He also says about joining the party: “But I’ve never regretted it. As a matter of fact, it’s possible to say I would have regretted not having done it. . .” Indeed, in his private papers he admits that he “reaffiliated with the party in 1954,” apparently his passion for a Communist America burning brightly as ever.

Like so many of his comrades, he became a Hitler apologist after Stalin joined Hitler in that 1939 pact. In order to poison the well against Hitler’s enemies, he demonized the Fuehrer’s foes. England was no democracy, he argued in his 1941 novel, The Remarkable Andrew, because it had a “king.” FDR was guilty of “treason” and “black treason” for his pro-England policy. No drop of American blood should be risked or spilled for the selfish and deceitful British. Yet when Hitler betrayed his wonderful Stalin in June of 1941, launching a massive invasion of Russia, ah, finally, Trumbo discovered a compelling reason to fling thousands of young Americans to their deaths on foreign battlefields.

When North Korea waged war against South Korea in 1950, where did Dalton stand? In an unpublished movie script dedicated to several Hollywood Ten figures, he has the heroine declare that North Korea’s invasion was perfectly justifiable, for this is “Korea’s fight for independence, just as we had to fight for our own independence in 1776.”

When the Hollywood Communists put on their horror show before HUAC in 1947, screaming at committee members and refusing to respond to legitimate questions, the studio executives laid down a rule: Those who refused to say whether they were party members and conspiring with our enemies in Moscow could no longer work in Hollywood. Trumbo stood with his fellow conspirators and Stalin.