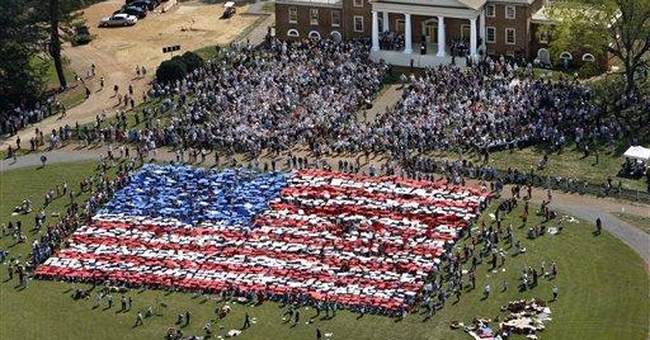 “It is the duty of every man to render to the Creator such homage, and such only, as he believes to be acceptable to Him,” wrote James Madison in his Memorial and Remonstrance. “This duty is precedent, both in order of time and in degree of obligation, to the claims of Civil Society.”

That’s quite a statement, coming from the same man who authored the straightforward assertion that “Congress shall make no law respecting the establishment of religion, or prohibiting the free exercise thereof.” One is left with the overwhelming conviction that Mr. Madison, like most of his fellow Founding Fathers, put a priority on one’s responsibility to his own conscience – even above his responsibility to his country, his government, or the prevailing political winds of society.

That assertion, as Father Richard Neuhaus said, is what makes the free exercise of religion “the irreplaceable cornerstone” of “the American experiment”:

“‘We hold these truths,’ the Founders declared. And when these truths about the ‘unalienable rights’ with which men are ‘endowed by their Creator’ are no longer firmly held by the American people and robustly advanced in the public square, this experiment will have come to an end.”

Those words are but a few drops from the fountain of thoughtful reflection that sprang from the living waters in the soul of Father Neuhaus, one of the most prominent church leaders in America and one of the most influential theologians and political philosophers of the last 50 years.

The fountain ceased on January 8, when he passed away at 72, but the living waters still flow. And Father Neuhaus’ single-minded commitment to that “duty” Madison describes, and his own robust efforts to advance the cause of Truth and religious liberty, will undoubtedly influence his fellow Americans for many years to come.

I was one among the multitude of those blessed by Father Neuhaus’ wise, personal counsel; to witness the astonishing breadth of religious and political belief represented at his memorial service last week was to recognize the truly remarkable impact one man can still have on his times, if that man is committed, heart and soul, to his convictions…and expresses those convictions with love and grace.

The attendance of so many leaders of so many persuasions was all the more remarkable because Father Neuhaus, for all that grace, was no passive commentator on the formative issues of his age. He was, first and foremost, a fighter – a man who was never content to raise the alarm when he could wade hip-deep into the forensic fight.

To his mind, a conscientious Christian didn’t stand by and just pray for his culture. A virile Christian’s duty was to engage that culture…and Father Neuhaus did so ferociously, leading from the front of the battle line.

It’s particularly ironic that he should pass away just a few days before Religious Freedom Day, whose themes he had so long and so eloquently defended, and before the 36th anniversary of the terrible Roe v. Wade decision, whose imports and impact he had striven to reverse. What he would not have found ironic – what, indeed, he would have undoubtedly made it a point to underscore – was the significance of the proximity of these two occasions.

For no two ideas could be more inexorably linked than religious freedom and the sanctity of life.

A surprising number of people don’t believe that. Indeed, when the organization I lead, the Alliance Defense Fund, was in its formative stages, many friends in the conservative and even Christian communities warned me not to sully the “purity” of our legal efforts in defense of religious liberty by involving our ministry with complicated, no-win “side issues” like the right to life or the defense of marriage as the union of a man and a woman.

But with each passing year, it becomes more obvious to me what Father Neuhaus understood all along: that these issues are intricately, intimately entwined with each other – that the killing of innocents by the purveyors of abortion and the willful destruction of marriage and families by advocates of the homosexual agenda are both inherently fatal to religious freedom in America.

And, by the same token, the steady erosion of religious liberties by leftist organizations like the American Civil Liberties Union makes the perversion of justice, the dissolution of families, and the death of innocents inevitable.

He wrote that 17 years ago, and the fulfillment of his prophecy is evident coast-to-coast, as legislatures, executives, and courts in states like Massachusetts and California increasingly exercise political gymnastics to exempt themselves from the laws of their state constitutions and the expressed will of their citizenry – most of whom overwhelmingly and consistently oppose fabricating same-sex relationships into “marriages.”

It’s evident in the numerous judicial rulings that deny religious groups equal access to the public facilities enjoyed by other members of the community.

It’s evident in the efforts to force doctors, pharmacists, and other professionals to submit their conscience to the convenience of a “customer.” It’s evident in increasingly forceful efforts to silence those who would publicly express their deepest religious convictions…in a school art project, a classroom debate, or outside an abortion clinic.

No serious historian can contend that our nation was “so conceived” as to promote the termination of life post-conception. Nor can any citizen with Madison’s sense of “duty” believe that our nation will ever enjoy a “new birth of freedom” while the births of so many of the next generations are being casually obliterated.

Neither freedom nor life will ever be sacred, as long as either one is expendable.

That is why, in the words of Father Neuhaus, a great champion of freedom, “We shall not weary, we shall not rest, in the fight for life.”

That is why, in the courtrooms and the legislatures, in classrooms and newsrooms, at altars and ballot boxes, the battle goes on.