USMCA a Big Win for Texas 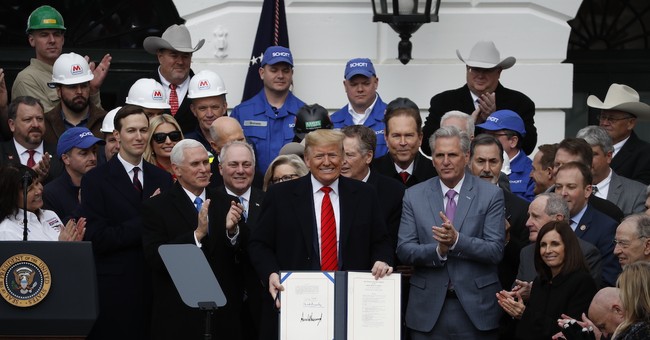 The North American Free Trade Agreement, better known as NAFTA, was signed into law over 25 years ago. The then-innovative trade deal revolutionized the way we conduct business with Mexico and Canada, Texas’ first and second largest export partners respectively.  I was the Mayor of Fort Worth when that deal was signed, and I saw firsthand how this deal gave our city – and other Texas cities along the I-35 corridor – a starring role in North American trade. However, the way we do business has evolved tremendously and NAFTA’s outdated provisions could no longer keep up with 21st century trade practices, dramatically reshaped by globalization of the internet and cross-border data flows.

The USMCA will provide a boost to American manufacturers and small businesses, deliver more jobs and better labor protections, and expand markets for our Texas farmers and ranchers. From local officials to small business owners, from constituents to heads of local chambers of commerce, Texans from all backgrounds have expressed the strong need for the USMCA.

Our great state enjoys the 10th largest economy in the world and has been the country’s No. 1 exporter for the past 17 years. In 2018 alone, Texas exported over $137 billion to Mexico and Canada. In Texas’ 12th Congressional District, which I’m proud to represent, 47 percent of exports—some $3 billion worth of goods—went to Mexico and Canada.  In all, over half of all trade-related jobs in our District were connected to commerce with our North American partners. We see similarly impressive numbers throughout the entire Texas delegation.

New trade rules will make it easier for Texas businesses to tap into foreign markets and participate in cross-border trade. The auto industry will see significant changes that will provide incentives for automakers to keep manufacturing jobs here in Texas, rather than sending them overseas. Moreover, the USMCA will eliminate onerous “local presence” requirements, benefiting America’s small businesses by removing the unnecessary burden of opening foreign offices as a precondition for doing business. As a former small business owner myself, I know these critical changes will help catalyze growth potential for small businesses all across the state.

USMCA will also assist job growth in Texas, where we lead the nation in export-dependent jobs. With nearly 1 million Texans employed in trade with our North American partners, USMCA will raise the bar for enforcement of labor laws, allowing workers to receive higher wages and more benefits. The agreement is expected to create over 176,000 new American jobs, generating growth across the country.

Texas has more farms and ranches than any other state, and our agricultural sector’s economic impact is almost $100 billion. Current agriculture exports from Texas to Canada and Mexico total about $7.2 billion, and we expect a trade increase of $2.2 billion under this new deal.  The new trade agreement will protect market access for the agriculture industry and provide the stability our farmers and ranchers need to ensure Mexico and Canada remain our top customers for agricultural goods.

As NAFTA ushered in innovative changes to trade in the 1990s, I look forward to seeing Texans and Americans reap the benefits of this new chapter in North American trade through the USMCA.  The agreement is a clear win for Texas families and the U.S. economy. I was proud to vote in support of the USMCA to secure a major milestone that puts the Texan—and American—farmer, rancher, manufacturer, and consumer first.