Liberal Censorship and Its Roots 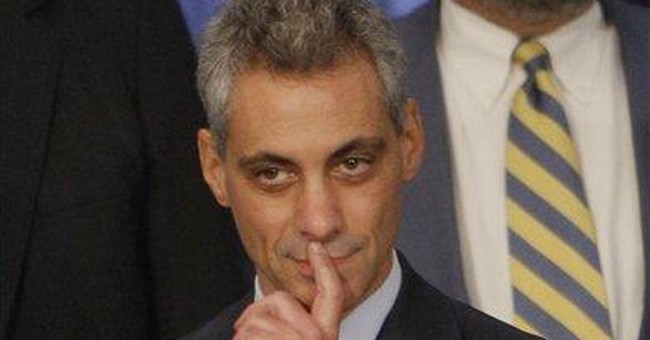 The most unnerving aspects about the Democrats' sweeping victory Nov. 4 are their intolerance for dissent and their willingness to censor and otherwise suppress their opponents. Consider:

We keep hearing that Sarah Palin's criticism of Obama for "palling around with terrorists" increased death threats against him, which is bogus in the extreme but consistent with the inveterate liberal tactic of chilling conservative speech by saying it incites violence.

Ohio state employee Vanessa Niekamp said she was ordered to run a child-support check on Joe the Plumber, the man who asked Barack Obama an innocuous question about redistributing taxpayer income. Niekamp doesn't remember ever having checked into anyone else without having a legitimate reason to do so, such as discovering that someone recently came into money.

On election night, Philadelphia police arrested a man who dared to wear a McCain-Palin '08 T-shirt at an Obama celebration rally. What's scarier is that the Obama crowd reportedly chanted with joy as cops arrested the man for exercising his freedom of political expression. According to the liberal worldview, arresting someone for disagreeing with you is not censorship, but implying someone is not patriotic is.

Obama has made no secret of his plan to pass "card-check" legislation, which some have described as the most radical revision of labor law since 1935. It would permit unions to eliminate secret ballots -- against the wishes of 78 percent of union members -- which would represent a radical blow to democratic principles.

Democrats fully intend to reinstitute the Fairness Doctrine, a euphemistically named regulation aimed at shutting down conservative talk radio, which Sen. Chuck Schumer has compared to pornography. Remember that conservatives have never advocated government action to suppress or censor the liberal media monopoly, which has existed for decades and still dominates mainstream media today. Their answer was the alternative media.

But what is even more frightening than the sinister schemes of liberal politicians to silence and criminalize political opposition is the apparent eagerness of rank-and-file liberals to go along with them, as witnessed by the many examples I've cited and numerous gleeful e-mails I get taunting me about the imminent re-invocation of the Fairness Doctrine.

I believe this arrogant attitude can largely be traced to the top-down indoctrination in our schools, cultural institutions and media that liberalism is morally superior because it is tolerant, diverse, intellectual and enlightened. This view holds that conservative expression doesn't deserve constitutional protection because it is inherently evil. As one liberal academic administrator said in justifying his Draconian action in suppressing a Christian viewpoint, "We cannot tolerate the intolerable."

This self-blinding, superior mindset explains how liberals can accuse conservatives of racism for their legitimate political differences with Barack Obama while demeaning, with racist epithets, Condoleezza Rice or Clarence Thomas. It's how they can mock conservatives for being close-minded while unilaterally declaring the end to the debate on global warming because of a mythical consensus they have decreed. It's how they can demand every vote count and exclude military ballots. It's how they can glamorize Jimmy Carter for gallivanting to foreign countries to supervise "fair elections" and pooh-pooh ACORN's serial voter fraud in their own country. It's how they can threaten the tax-exempt status of evangelical churches for preaching on values, even when the churches don't endorse candidates, but fully support a liberal church's direct electioneering for specific candidates. It's how they can ludicrously depict President Bush as a dictator while romanticizing brute thug tyrants Hugo Chavez and Fidel Castro. It's how they can falsely accuse President Bush of targeting innocent civilians in Iraq when he does everything possible to avoid civilian casualties but demand our withdrawal from South Vietnam, which resulted in the massacre of millions of innocents. It's how they can advocate the banning of DDT in the name of environmental progress but be unconcerned about the untold malaria deaths that resulted. It's how they can oppose the death penalty for the guilty but protect the death penalty for the innocent unborn. It's how they can prevent the teaching of "intelligent design" in schools in the name of science but defend the many documented myths of biological evolution in public-school textbooks, also in the name of science.

If you believe the left is tolerant, open-minded and democratic, you're in for a rude awakening.