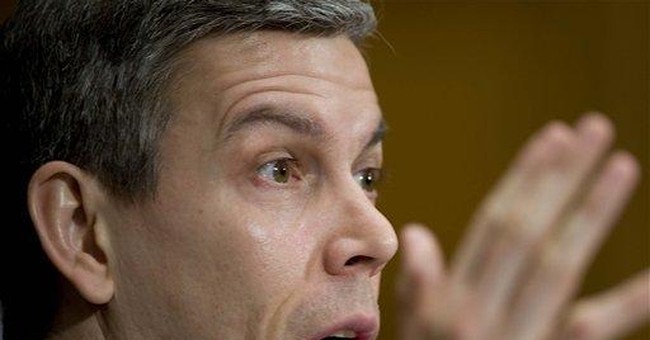 The past few weeks have been rough for many Obama cabinet appointees, but one appointment has garnered an impressive amount of bipartisan support.  Arne Duncan, President Obama’s choice to head the U.S. Department of Education, has been lauded by Democrats and Republicans alike.  The former Chicago Public Schools CEO comes to Washington with an impressive reputation for innovation and reform, both of which are desperately needed by the American education system.  In other words, now would be a fabulous time for Duncan to live up to the hype.

Unfortunately, other than the Duncan appointment, what we’ve seen so far from the Obama administration points to business as usual in the education world.  The so-called “stimulus” bill was packed full of education spending with the incorrect assumption that increased spending is the answer to America’s education woes.  Study after study has confirmed that increased funding does not lead to better results.  Some of the worst performing school districts in the country (see Washington D.C. as a prime example) have the highest per-pupil spending.   Instead of pouring money into a flawed system, fundamental reforms to the system itself are needed to increase school performance.

Assuming Duncan is ready to make his mark as a reformer, I humbly submit some action items he may want to consider:

-Increased parental choice.  Parents are increasingly frustrated with the limited options available within the public school system.  Often times the only option a parent has is the local, government-assigned public school, which may or may not fit the needs of their child.  Fortunately, Duncan has supported several school choice measures in the past.  Whether it’s through charter schools, education tax credits, open-enrollment policies, or voucher programs – any program that gives more choice and flexibility to American families regarding education is a sign of progress.  No child should be forced into a failing government school because of his or her address.

-Merit pay for teachers.  If Duncan needs motivation on this issue, he needs to look no farther than D.C.’s own Michelle Rhee.  Rhee has been busy at work restructuring the District’s pay scales so that good teachers are rewarded and bad teachers get the boot.  A shockingly high percentage of teachers tell surveyors that “trying their best at work doesn’t matter.”  With the current pay scales in most school districts, it’s hard to blame them.  Unlike any other profession, performance plays practically no part in salary decisions.  Simple reforms in pay structures for teachers to provide an incentive for excellence would have a tremendously positive impact in the classroom.

-Resist the urge to “Title IX” the sciences.  The 2008 election featured many calls for increased Title IX enforcement to stomp out discrimination in the academic sciences.  Unfortunately, the data show that discrimination doesn’t explain the death of women in science programs and, even if discrimination did play a role, Title IX would not fix the problem.  Duncan would be well suited to resist the call for more government intervention in the classroom and instead support the many private programs that encourage more women to consider science classes and professions.

-Consider student interest in Title IX enforcement.  Since 1979, Title IX has operated under the one-size-fits all measure of proportionality:  the gender breakdown of student athletes must mirror the gender breakdown of the overall student body in order for a school to be in compliance with the law.  While other enforcement mechanisms theoretically exist, only proportionality provides clear cut evidence of compliance, and thus it is overwhelmingly the measure of choice on campus.   The Bush administration tried to provide an alternative by creating guidelines for a comprehensive student interest survey:   if the survey shows that a school is meeting the interests and abilities of the underrepresented sex (aka women), then a school could prove compliance.  The surveys rest on the commonsense idea that student interest and local preferences should be paramount, not a slavish commitment to “gender proportionality” for its own sake.   Many in the Obama administration no doubt want to roll back Bush’s interest survey.  But if Duncan is interested in real reform, then he should make efforts to expand, rather than retract, flexibility in Title IX enforcement.

Of course, those reform ideas are just the beginning of the change that’s need to meaningfully improve American education.  Here’s hoping that Duncan is one Obama Administration official who is truly committed to change.