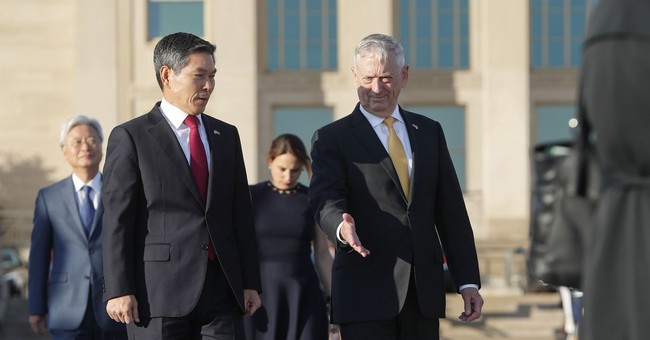 Today Defense Secretary Jim Mattis said his final goodbyes after decades of service to the nation and more recently a long road of policy disagreements with President Trump.

Mattis who was seen as a steady hand and a leader who valued traditional relationships with foreign powers originally enlisted in the Marine Corps at the age of 18. Now 68, the former Defense Secretary urged his brothers and sisters in arms to "hold fast."

In a letter to all branches of the United States armed services, Mattis pens, "Our Department's leadership, civilian and military, remains in the best possible hands."

"I am confident that each of you remains undistracted from our sworn mission to support and defend the Constitution while protecting our way of life," Mattis adds.

"So keep the faith in our country and hold fast, alongside our allies, aligned against our foes."

Mattis concludes by stating that, "It has been my high honor to serve at your side. May God hold you safe in the air, on land, and at sea."

Mattis farewell message: “Our Department is proven to be at its best when the times are most difficult. So keep the faith in our country and hold fast, alongside our allies, aligned against our foes.” pic.twitter.com/YuxnfkutGg

The outgoing Defense Secretary Mattis will be leaving his post early after President Trump tweeted that come January 1st, the current Deputy Secretary of Defense, Patrick Shanahan would take over as the Acting Secretary until Trump appoints a permanent replacement.

This comes after Mattis sent a resignation letter on December 20, after President Trump ordered for all U.S. troops to be withdrawn from Syria.

The farewell letter today comes on the same day that President Trump has changed his tune and declared that troops will be coming "slowly" home from Syria.

If anybody but Donald Trump did what I did in Syria, which was an ISIS loaded mess when I became President, they would be a national hero. ISIS is mostly gone, we’re slowly sending our troops back home to be with their families, while at the same time fighting ISIS remnants......