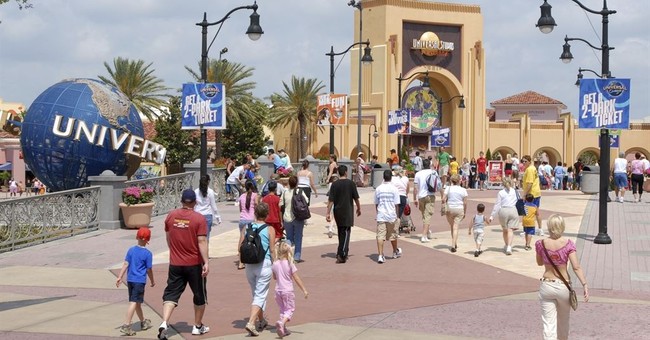 Two years after their 38-year-old father sustained a deadly heart attack after going on the "Skull Island: Reign of Kong" ride at the Universal Orlando theme park, the family has decided to file a lawsuit against Universal Orlando Resort in a Florida court.

The Guatemalan family, who speaks predominantly Spanish, claims that their father, Jose Calderon Arana, didn’t speak English and had prior heart problems. They filed suit in the name of a "wrongful death lawsuit," which claimed in part that Universal was negligent and careless by "not displaying warning signs in Spanish."

The lawsuit goes on to state that, “Universal was aware of the great number of tourists on their premises who do not speak English.”

The lawsuit and reports indicate that Calderon Arana, the father, wasn't feeling great prior to lining up for the ride and his wife believed he had an "upset stomach."

While the father sat on a bench after the ride, he became faint, collapsed, and was taken to the hospital where he later died. The family in the lawsuit states there was a delayed response to their father passing out from medical personnel at the theme park.

According to the lawsuit, a sign at the entrance of the "Skull Island: Reign of Kong" ride states in English, "Warning! This ride is an expedition through the rough terrain of King Kong’s natural habitat. The movement of the truck is dynamic with sudden accelerations, dramatic tilting, and jarring actions."

The ride has a sign posted in English with accompanying diagrams that warns riders that “people with heart conditions or abnormal blood pressure, back or neck conditions, and expectant mothers” should not go on the ride, according to the report. (Via The Hill)

The lawsuit contends that the signs with warnings on them should be in multiple languages due to Universal's vast draw of vacationers from around the globe.

The now popular Universal ride, "Skull Island" was opened half of the year prior to the death of Calderon Arana in 2016.

Here's what the ride in question looks like: (The ride is modeled after a truck expedition through an island, that goes off the tracks and takes a wild turn!)

The family’s injury attorney, Lou Pendas, told USA Today, "it’s not unreasonable to have ride warning signs in English, Spanish and French so visitors can make informed decisions about whether they should go on the ride. Orlando was the most visited U.S. destination in 2017."

Townhall has reached out to Universal Orlando Resort and Universal Theme Park for comment.