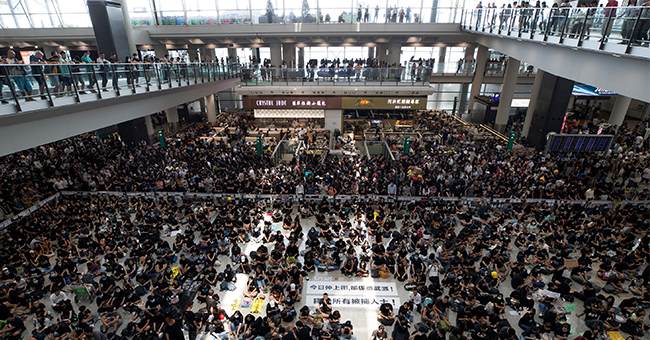 The Hong Kong police have clashed with protesters in the city-state's airport on Tuesday evening as demonstrators continue to occupy the international travel hub for the fifth day straight since Friday, in a sit-in that has canceled hundreds of flights in the last two days.

According to Skynews, which has a film-crew on the ground providing a live-feed, the police claimed their officers arrived at the airport not to disperse protesters, but to rescue people that were captured by the protesters. But Skynews said that those allegedly captured individuals may have been undercover officers that were secretly surveilling the protests and attempting to cause turmoil.

The protestors tied up one individual they suspected of being a "spy" for the police force.

Protesters at the Hong Kong airport tied up a man after a "I love HK Police" t-shirt was found inside his bag pic.twitter.com/9eop8dNWwB

The Skynews broadcast showed at least a few dozen officers outside of the airport at this current moment. Thousands of protesters are still in the airport.

"They need to come in much larger numbers if they want to do a clearance operation. I wonder whether they even can," said Steward Ramsey, the Sky News reporter on the ground.

Police have been cornered in by protestors while trying to get on a bus to leave the airport in Hong Kong.

Tensions are escalating as riot officers arrive to try and disperse protestors in the airport: https://t.co/hyF4BMCDUL pic.twitter.com/iQRHc4IOtf

Some protesters have left the airport after the police arrived, according to SkyNews. At this point, the fullest extent of interaction between police and protesters are not apparent.

The protesters mobilized at the eighth busiest airport in the world as police violence against protesters escalate, believing that the authorities will dare not use aggressive policing measures in front of international travelers.

However, as footage from the police action comes out today, it is becoming apparent that measures are escalating as China looks to crack down on the movement.

President Donald Trump has also commented on the Hong Kong protests — saying it is a "very tough situation."