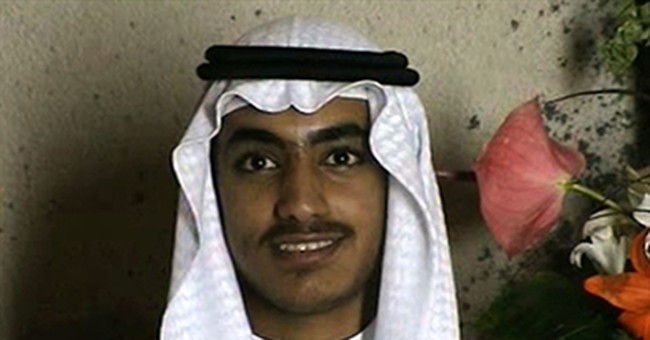 Hamza Bin Laden, son to Osama bin Laden and the heir presumptive to al Qaeda, is dead, according to news reports that cited unnamed U.S. officials.

Officials told The New York Times that a strike killed the terrorist leader sometime in the first two years of the Trump presidency. The United States played a role in the lethal operation, but it remains unclear in what capacity.

Hamza, who emerged from relative obscurity in 2015 to call for jihadist attacks on western countries, was considered a rising leader in the al Qaeda network who might one day lead it. Ali Soufan, a former FBI agent who investigated al Qaeda, told the Voice of America that "Hamza was destined to be in his father's footsteps. ... He is poised to have a senior leadership role in al-Qaida."

In response to his growing prominence in the global Sunni jihadist movement, the State Department had slapped on a $1 million bounty for any information on Hamza back in March. The New York Times reported that the al Qaeda heir was already killed by the time the government announced the bounty, but his death was not confirmed yet.

Al Qaeda has as of yet confirmed nor denied Hamza's death. Meanwhile, President Donald Trump and National Security Advisor John Bolton have both declined to comment.

The death of the ideological and biological heir to Osama, if true, would be a major setback for the globe-spanning terrorist organization, which sought to leverage Hamza's name-value and youth to attract new recruits, according to a policy brief by Brookings Institution.

"Hamza’s death is a blow to al-Qaida’s attempts to regain its momentum and restore its position as leader of the global jihadi cause. More important, it illustrates al-Qaida’s many problems and the successes, however incomplete, of U.S. counterterrorism," Daniel L. Byman, senior fellow at Brookngs, wrote.

Much of Hamza's life remains shrouded in mystery, but he was probably born in 1989, around the time his father created al Qaeda, according to the FBI. The New York Post reported that he was Osama's favorite son of his 26 progenies.

Hamza spent his childhood accompanying his father in his jihadist campaign across many base camps, from Sudan to Afghanistan. Growing up embedded in the core of al Qaeda's operation, Hamza was indoctrinated in Jihadist thought from a young age: an al Qaeda propaganda video showed a 12-years-old Hamza reciting poetry praising Kabul's Taliban defenders, according to a brief prepared by Soufan, the former FBI agent.

But after 9/11, Osama, fearing for their safety, sent his family into hiding in Iran, where Hamza possibly was held against his will until 2010. At some point, he married the daughter of 9/11 hijacker Mohamed Atta, cementing his place in al Qaeda elitedom, The New York Post reported.

Hamza was not present in Osama's residence in 2011 when a Navy SEALs team stormed the compound, and he kept a low profile for a few years after his father's death.

The Osama progeny first stepped into the limelight in 2015 when he starred in al Qaeda's propaganda and called for lone-wolf attacks on western countries. He since then appeared in several al Qaeda propaganda footage, threatening the destruction of the United States, Israel, and other western countries.

He last appeared in a message on March 2018, in which he threatened the rulers of Saudi Arabia, according to Military Times. He has not been heard of since then.

Despite Hamza's ideological credentials and biological legitimacy, he was not the ideal figure to lead tomorrow's jihadist struggle for al Qaeda, according to Byman, the Brookings fellow. He lacked substantive combat or leadership experience that would have solidified his claim to his father's legacy.

"Hamza himself neither fought in the front lines like his father nor ran a major clandestine network as did Zawahiri. Abu Musab al-Zarqawi, the legendary founder of al-Qaida in Iraq, became a jihadi superstar because of his willingness to lead the fight against U.S. forces and the Shiite government of Iraq. Islamic State leader Abu Bakr al-Baghdadi also fought, and he had scholarly credentials to boot," Byman noted.

"Hamza, in contrast, had only a name," he concluded.