The World Bank Learned Nothing From the 2014 Ebola Outbreak, and a New Pandemic Is Killing Thousands 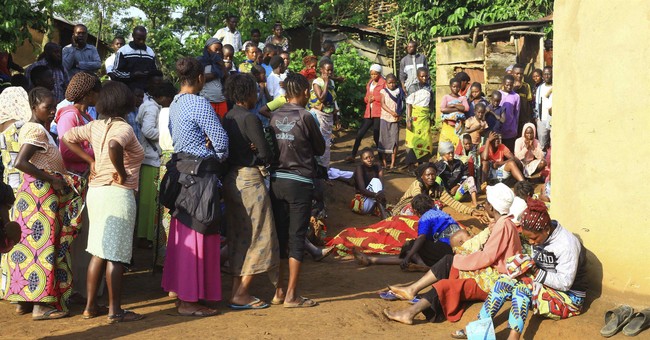 Ebola is back in full force, but an opaque bureaucratic mechanism is preventing the World Bank from releasing upwards of $200 million in emergency funding that was explicitly appropriated to prevent another Ebola outbreak.

A new Ebola crisis in the wartorn areas of the Democratic Republic of Congo has killed nearly two-thirds of the more than 2,500 people it has infected, prompting the World Health Organization to declare a global public health emergency on July 17. The “public health emergency of international concern” is the highest level of alert that the WHO can issue and has only been declared four times in the past, including for the previous Ebola outbreak that ravaged West Africa between 2014 to 2016, according to BBC.

The deadly virus kills on average 50 percent of victims through horrific bleeding and severe organ failure according to the WHO, and has previously even reached American shores in 2014, killing two.

The current pandemic echoes the circumstances surrounding the 2014-2016 Ebola outbreak, which infected over 28,000 people of which 11,325 died, WHO statistics show. Like in the previous pandemic, many locals in Congo are skeptical of public health officials and ignore their instructions, sometimes even attacking and killing them. This widespread hostility, coupled with the civil war in the affected part of the Congo, is exacerbating the current crisis.

The similarity goes further, however. In the previous pandemic, the international community did not provide adequate emergency funding before the virus gained enough momentum to spread from its origin in Guinea to 10 countries. This time again, cash-strapped WHO responders are running a deficit of $54 million and have struggled to provide care and ensure the security of its personnel.

This wasn’t supposed to happen again. In the aftermath of the West African outbreak, the World Bank erected a new system that was supposed to release immediately emergency funding when an outbreak is starting to get out of hands. The immediate response of the Pandemic Emergency Financing Facility, or PEF, was supposed to address a time gap in the emergency response caused by developed countries making substantial donations only after the outbreak was in full swing.

Unfortunately, as Laurie Garett pointed out in a recent article in Foreign Policy, PEF has only released $20 million — only $6.5 million of which is diverted to the WHO — in response to the outbreak when its mandate states that it is entitled to release up to $200 million for outbreaks of this type. The PEF’s handout is not enough the pay off the deficit run by the WHO, much less fund the global response to the outbreak.

PEF is an international financial mechanism where private market actors will sell insurance and purchase bonds from the PEF to hedge against an outbreak. If an outbreak becomes severe enough that certain “activation criterion” delineated in the financial instruments are satisfied, the private actors will immediately pay a pre-determined amount to the PEF, which will then be used to support the crisis response.

But even with the WHO declaring a global health emergency, the PEF has yet to announce that the “activation criterion” has been met, leaving potentially millions in funding in coffers when they could be mobilized to contain the Ebola outbreak. The $20 million released by the PEF were money donated to the entity by Germany and Japan and are not part of the insurance framework.

The problem, Garett said, is that PEF is very unclear about what exact pandemic conditions will satisfy the “activation criterion.” A World Bank page noted that the criterion will take into account “outbreak size (i.e., number of cases or number of deaths), outbreak growth (i.e., the outbreak must be growing over a defined time period) and outbreak spread (i.e., two or more countries affected by the outbreak),” but did not provide any specifics.

Garett notes that private actors do not want an outbreak to meet the criterion because then they would lose money. This financial disincentive clouds the decisions made by the PEF’s governing body, which must balance the need for crisis response and the need to attract investors.

The United States has committed $98 million to combat the Ebola outbreak, most of all foreign donors. However, Garett lamented that most of the U.S. money is being used for neighboring countries or areas of the Congo that is far away from the source of the outbreak, leaving up to debate how effective the money is.

Separately, the United States appropriated $1.097 billion to the World Bank in 2018, the largest amount of all donor countries. However, given the blanket mission of the World Bank to combat global poverty, it is unclear how much of the U.S. contribution is given to Congo or the WHO. Furthermore, Germany and Japan are the primary financial supporters of the PEF, and it is unlikely that the United States has a large financial role in the entity.

The violent conflict in the region has also led many people in Congo to flee the country and become refugees in the United States. A new migrant surge of hundreds of people from Central Africa — mainly Congo and Angola — has arrived in the U.S. southwest border, overstretching resources for refugees, The New York Times reported. The Times also reported that local officials are struggling to assuage fears of Ebola outbreaks in the United States as they accept the refugees.