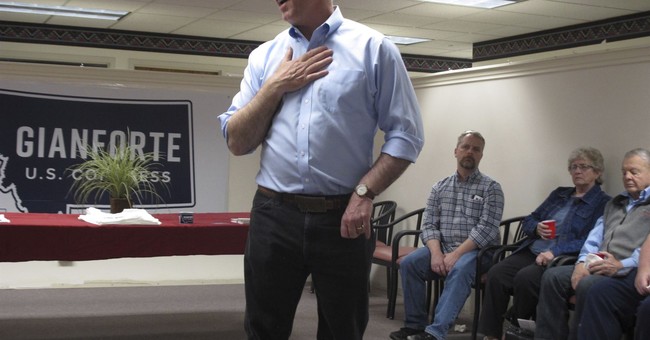 Rep. Greg Gianforte (R-MT) announced on Friday that he is running for Montana governor, shaking up a gubernatorial race where Republicans seek to usurp a seat long held by Democrats.

If Gianforte wins the Republican primary in June 2020 and the gubernatorial race in November 2020, he will become the first Republican to occupy Montana’s governor’s mansion in 16 years.

“For 16 years, Republican policies and conservative solutions have been met with a veto pen,” Gianforte said at the Montana Republican Party Convention held over the weekend, Reuters reported. “I think everyone in this room would agree that it’s time for a change. It’s time to set a new course with a new leader.”

Kicking back into campaign-season mode, Gianforte brought back to life his twitter account on Friday, which was dormant since the 2018 election, to announce his candidacy. The congressman made the following three campaign promises to voters in a tweet that followed:

As your Governor, I will:

?Say no to tax increases

The congressman, who currently occupies Montana’s at-large seat in the House, further emphasized that he will “make job creation his top priority” as governor in a separate campaign video released the same day. Gianforte’s company RightNow Technologies, one of five firms that the congressman founded, created over 500 jobs in Bozeman, Montana, according to his bio.

Gianforte is perhaps most well-known for body-slamming Guardian reporter Ben Jacobs to the ground during the 2017 special election for the House seat he now occupies. After initially claiming Jacobs provoked him in the encounter, Ginaforte pleaded guilty to misdemeanor assault. He was later fined, sentenced to community service, and ordered to take anger management classes.

Despite this controversy, Montana’s sole representative to the House comfortably defended his House seat in 2018, beating the Democrat challenger with a four point lead. President Donald Trump visited the state during the election season in support and had this to say about the body-slamming incident:

For Gianforte’s part, his spokesman responded to Trump’s praise by saying that the congressman “regrets what happened, he's not perfect, he's taken personal responsibility, this has been widely covered,” according to the Billings Gazette.

Gianforte is the sixth Republican entering the race for the governor’s mansion currently occupied by Democrat Steve Bullock, who is barred by term limits from keeping his seat. Bullock is currently running for president; however, he did not qualify for the DNC primary debate because he failed to cross the 1 percent polling threshold in three national polls.

This is the second time the Montana representative is running in Montana’s gubernatorial election, which is scheduled for November 2020 — back in 2016, Gianforte lost to Bullock by a margin of 50-46. That same year, Trump carried the state by a margin of over 20 points.

In a matter of days, the entry of Montana’s only House representative shook up the crowded Republican primary field. Tim Fox, Montana’s attorney general also running the Republican primary, blasted Gianforte for “abandoning his constituents to run for governor for the second time in three years.” Meanwhile, Corey Stapleton, the state’s Secretary of State, quit the governor’s race to run for Gianforte’s House seat in 2020.

During his time in Congress, Gianforte served on the House Committee on Energy and Commerce. He also sponsored a successful bill that “designate specified river segments of the East Rosebud Creek in Montana as components of the National Wild and Scenic Rivers System,” conferring federal environmental protection on the river.

Recently, he joined a bipartisan effort to stop pay-raises for Members of Congress, postponing consideration for the appropriation bill in question. Gianforte is currently among the wealthiest members of Congress. He has a net worth of over $135.7 million, made from his software development business.

“Congress hasn’t done its job, it doesn’t deserve a pay raise, and I’ll continue working to prevent Congress from getting one,” Gianforte said in a June 13 press release.