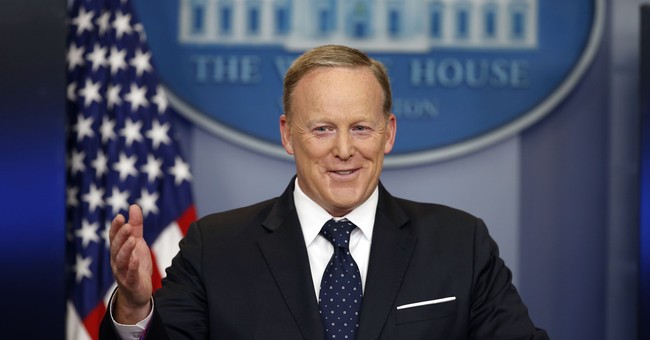 It’s been a year since Sean Spicer resigned as White House press secretary—and on July 24, Spicer’s book The Briefing: Politics, the Press, and the President will finally be in bookstores. Here are five reasons why you should go ahead and order The Briefing now:

1.) If you preorder the book before Friday, July 20th and submit proof of preorder here, you could win two tickets to Spicer’s July 24th book launch party in Washington, D.C. plus a $200 Visa Gift Card.

2.) President Trump called the book “a story told with both heart and knowledge… really good.”

A friend of mine and a man who has truly seen politics and life as few others ever will, Sean Spicer, has written a great new book, “The Briefing: Politics, the Press and the President.” It is a story told with both heart and knowledge. Really good, go get it!

Pre-order this book written by my good friend @seanspicer now! Available in stores July 24th, “The Briefing: Politics, The Press, and The President” is one of the best reads of 2018. https://t.co/6pMWo4tKm3

4.) In the book, Spicer opens up for the first time about some of his biggest blunders and infamous moments—including the time he referred to concentration camps as “Holocaust centers” in a press briefing.

5.) Though Corey Lewandowski shared secrets from his time on the Trump campaign in his bestseller Let Trump Be Trump, Sean Spicer is the first senior staffer from the Trump White House to release a book—and the pictures he paints of the president and other key figures in The Briefing differ dramatically from other public accounts.