Alabama Coach: It's an Honor for Trump to Come Watch Our Football Game 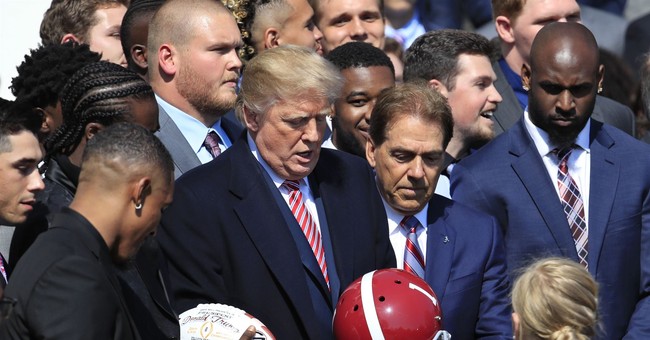 Alabama football coach Nick Saban, and perhaps the best college football coach in the history of the NCAA, told media this week that it is an "honor" that President Donald J. Trump will attend this week's match-up between the No. 3 Crimson Tide and No. 2 Louisiana State University Tigers.

Earlier this week, it was reported the University of Alabama was coordinating with Secret Service and the president's advance team to arrange for his visit this Saturday.  Saban, coach of six national championship teams, told the Montgomery Advertiser that he is excited to have the commander-in-chief travel down to Bryant-Denny Stadium.

"Well, it’s an honor, I think, that the President of the United States would be interested enough to come to the game," Saban told the paper. "I’m sure we’ll do everything we can to welcome him."

Saban also recalled the time that then-President Bill Clinton visited Michigan State University, where he was the head coach at the time.

"Bill Clinton came to Michigan State to speak at the graduation commencement ceremony, and they actually headquartered in our (football) facility building, so I had an opportunity to meet him and talk to him,” Saban said. "(At one point), the Secret Service guys came and got my couch and asked if they could take it to his office so he could take a nap and I said, ‘Certainly.’"

As Cortney has covered, President Donald J. Trump has made two other trips to athletic events in the past month. He traveled to the World Series Game 5 in Washington, D.C. as well as a UFC fight in New York City.

For more information on Saban, here is a remarkable 60 Minutes interview of "the Perfectionist."