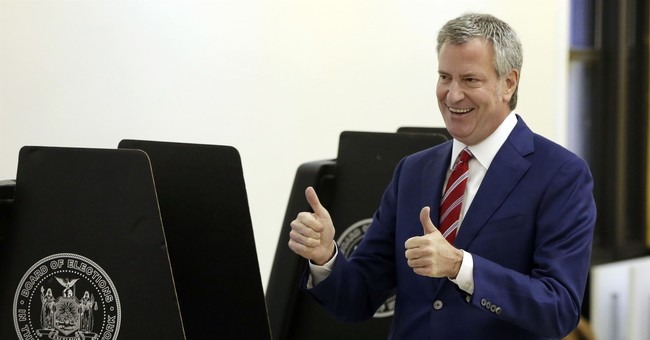 New York City Mayor and failed 2020 Democratic presidential primary candidate Bill De Blasio is catching heat from hundreds of mayors across the country upset with the Big Apple for exporting thousands of homeless people to their towns via a secret Department of Homeless Services program known as the "Special One-Time Assistance Program." Apparently, the taxpayers of New York City provided 12,482 homeless individuals from more than 5,000 families with a whopping $89 million to be used for transportation, a year's worth rent, and home furnishings if they moved out of the city. Where did these otherwise homeless people go? To hundreds of towns across the country, but New York failed to inform these localities of their new residents' financial status.

The city spent approximately $41,000 per family to get them out of the city. But, since these individuals were homeless, elected officials are now worried that their districts will be unable to handle these newly acquired individuals should they need public assistance.

"Hawaii will not be able to handle a large number of homeless people being dumped here should New York continue this practice," Democratic state Rep. John Mizuno stated after learning one family moved to Honolulu."

"I ask that your agency conduct a legal review and investigation into this matter, as many Hawaii residents have serious concerns that this illegal program could exasperate [sic] an already tragic situation here in Hawaii," he told New York City, according to the New York Post.

Indeed, even the Democratic mayor of nearby Mount Vernon, New York is demanding New York City take these people back.

"I want to send a message to everyone: We know what you are doing, and I’m not playing with you," Mayor André Wallace said in a statement to the city. "Those days are over. Our town is not standing for it."

Apparently, for at least one family in Mount Vernon, once the taxpayer funded rent expired, the homeless families still had not earned a paycheck. The landlord then evicted the individuals, and they ended up on Mount Vernon's public assistance.

"[The City] had to get them out of there and into a shelter," Wallace told the New York Post.

The DHS defended their actions, saying that mayors like Wallace were being offensive.

"Use of language like 'export,' 'ship,' 'dumping grounds,' when talking about human beings who [are] just trying to find housing and get back on their feet is offensive to us and to those we serve and support every day,” spokesman Isaac McGinn told New York Post.