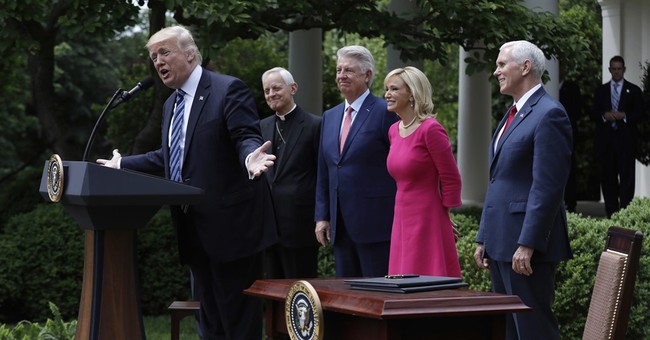 Paula White-Cain, one of President Donald J. Trump's spiritual advisors, told the Washington Examiner that Trump has previously given serious thought to building a giant mega Church made out of glass. The revelation comes in White-Cain's new book, Something Greater: Finding Triumph Over Trials.

According to White-Cain, Trump approached her in 2006 about building a cathedral. "He wanted to build a house of God,” she told Paul Bedard. "He said, 'Let’s do this, let’s build this before we're too old.'"

"He said, ‘Let’s build a crystal cathedral for God," she added, remarking that it was going to be similar to a famous cathedral in Los Angeles.

The preacher has known Trump for 18 years. Here is what she had to say regarding her spiritual journey with the real estate mogul-turned-president:

God used Donald Trump in my life as much as I was used in his life,” wrote the pastor, who delivered the invocation at his inauguration on January 20, 2017.

“When it comes to my assignment to the president of the United States, I have come to understand that vindication is in the womb of time. I will stay faithful to what God has called me to do all the days of my life, and I don’t try to figure it out.”

According to the New York Times, White-Cain will actually be joining Trump in the White House's Office of Public Liaison. Her "role will be to advise the administration’s Faith and Opportunity Initiative, which Mr. Trump established last year by executive order and which aims to give religious groups more of a voice in government programs devoted to issues like defending religious liberty and fighting poverty."