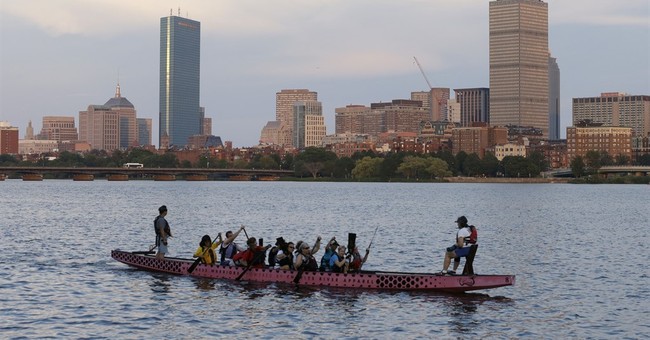 Meet the New Puritans, same as the Old Puritans!

The New Puritans, the left-at-large across the country who have replaced rigid rules and guidelines for a society based on the Bible and hard work with moral expectations that are based on ever-changing parameters of political correctness and victimhood that bows before the almighty government, have introduced a new bill in Massachusetts which could outlaw the word "b*tch" and punish anybody who used the term in a derogatory manner. Those who do break the law would be forced to pay a fine if found guilty of using the swear word. The bill known as "An Act Regarding the Use of Offensive Words" will be debated in the commonwealth's state legislature Tuesday at 1:00 pm.

Here's the full text of the bill:

Section 53 of chapter 272 of the General Laws, as appearing in the 2016 Official Edition, is hereby amended by adding the following subsection:-

(c) A person who uses the word “bitch” directed at another person to accost, annoy, degrade or demean the other person shall be considered to be a disorderly person in violation of this section, and shall be subject to the penalties provided in subsections (a) and (b). A violation of this subsection may be reported by the person to whom the offensive language was directed at or by any witness to such incident.

The bill was introduced by Democrat Daniel Hunt, the representative from Massachusetts's 13th District. Hunt claims that he brought forth the bill because a constituent requested that he do so.

"Any time a constituent approaches me with something that is of concern to them, I follow through with it,"  Hunt told the Boston Herald. "In this instance, someone asked me to file a bill that they deemed was important and I thought it was a good exercise to let that bill go through the process."

Cambridge civil-rights attorney Harvey Silverglate told the Herald this bill would never survive in the courts and is a silly waste of time.

"There’s a certain category of legislation that’s patently unconstitutional. This is among them," Silverglate said. "This is just the latest futile effort but the word police to control what other people say and indirectly control what they think."

But this isn't the first case of leftists wanting to dictate what speech American citizens can use in recent years. In New York City, you can be fined upwards of $250,000 for using the word "illegal alien." Perhaps more concerning, a recent poll suggests that "Four-in-ten Millennials say the government should be able to prevent people publicly making statements that are offensive to minority group."

Well, just in case this bill actually passes in Massachusetts and is upheld by the courts despite the First Amendment, perhaps this video of Indiana coaching legend Bobby Knight's gratuitous use of the b-word and other foul language will serve as inspiration for civil disobedience in the Bay State.