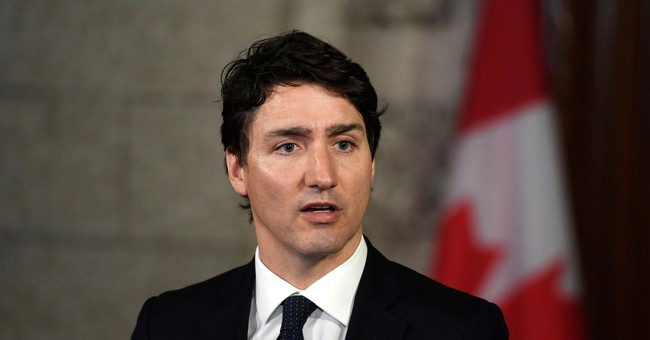 Canadian Prime Minister Justin Trudeau, like most global leftists, largely enjoys the benefit of a biased media that fawns over his every move and excuses each of his mistakes. But, Trudeau cannot escape the reality that out of the mouth of babes comes the most profound observations. Recently, Trudeau sat down for an on-camera interview with an elementary school class for a Canadian show titled, "New Mom, Who Dis?" What he most likely thought would be his easiest interview ever quickly turned into an uneasy situation for the embattled prime minister. Two black girls asked good ol' Justin why he painted his face brown in recent photos. He really didn't have an answer.

"Why did you face your brown?" the twin sisters said.

"Ooooh...uhm.. It’s something I shouldn’t have done because it hurt people. It’s not something that you should do and that is something that I learned," he explained while looking at the ground.

Bluntly, the girls then asked if he really painted his "nose and his hands brown."

Trudeau, then says, "Mhmmm," to which the two girls just blankly stare at him. As the awkwardness crescendoes, the prime minister says, "and it was the wrong thing to do. And I had a good conversation with my kids around taking responsibility for mistakes. And making sure that we're always sticking up for each other. And not teasing each other. And being respectful towards each other. Sorry that I hurt you as well. Sorry that I hurt kids who teasing and discrimination because of the color of their skin."

Perhaps it's the Canadian accent, but you can almost hear his voice increasing in anxiety as he spits out his excuses in hopes these kids will buy his feeble apologies.

The show's tagline is "REAL KIDS. REAL QUESTIONS." That's about as real as it gets. Good for Trudeau for sticking it out and good for those two girls for holding his feet to the fire. Now, if only we could get them to interview Virginia Governor Ralph Northam.

Here's a portion of the clip:

This is the most hilarious video ever posted on this site. It’s like a scene from The Office but in real life. I love it so much. pic.twitter.com/A73JZ2FgmA