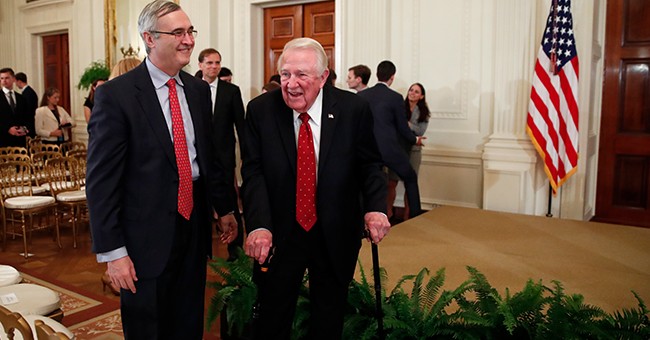 President Donald J. Trump awarded former Attorney General Edwin "Ed" Meese III the United States Medal of Freedom on Tuesday, the nation's highest civilian honor. Meese served under President Ronald Reagan and has since been active in fighting for conservative principles in Washington, D.C. on behalf of the American people.

"This prestigious award is the Nation’s highest civilian honor, which may be awarded by the President to individuals who have made especially meritorious contributions to the security or national interests of the United States, to world peace, or to cultural or other significant public or private endeavors," the White House said in a statement.

"Edwin Meese III has long been a thought leader and strong conservative voice on matters of law and policy.  As Counselor to President Ronald Reagan, Mr. Meese helped to craft a foreign policy strong enough to end the Cold War and played a pivotal role in securing historic tax cuts," the statement continued.

"As Attorney General, he promoted Federalism and the original public understanding of our Constitution.  Since leaving public service, Edwin Meese has continued to champion our Nation’s founding principles through his extensive work at The Heritage Foundation," the White House added.

On Tuesday on Townhall, Alan Sears praised Meese for his courage and conviction:

His great friend President Reagan once told the nation, “If Ed Meese is not a good man, there are no good men.” Good men, they say, can be hard to find. But they’re out there.

Ed Meese’s long fight to preserve liberty and the Constitution, and the uncompromising integrity with which he’s engaged that struggle, remind us of that—that there are, in fact, still “a few good men.” Even great ones.

And hope for America, and the freedom for which it stands.