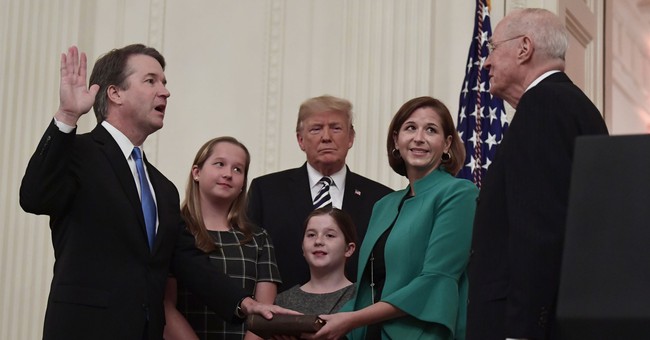 If you haven't learned by now, it really seems like authors Kate Kelly and Robin Pogrebin cannot be trusted in the new book, "The Education of Brett Kavanaugh." As Townhall has covered, and at the risk of using some D.C. beltway speak, it sure seems like they have been "lacking in candor" or "telling some mistruths" about their book and their "bogus" bombshell allegation -- aka they sound like liars. But, on Wednesday night, Kelly and Pogrebin claimed that it was actually Supreme Court Justice Brett Kavanaugh who is a liar. The authors say that Kavanaugh said he would speak to them about his life and various sexual assault allegations against him, but only if they lied in their book and said they never spoke to him. Huh?

NPR's Alison Kodjak tweeted Wednesday night, "Brett Kavanaugh agreed to talk to @katekelly and  @rpogrebin for their book - If they wrote that they didn’t talk with him.  The authors — who told the story tonight  @PressClubDC  — refused and walked away from the interview."

Brett Kavanaugh agreed to talk to @katekelly and @rpogrebin for their book - If they wrote that they didn’t talk with him. The authors — who told the story tonight @PressClubDC — refused and walked away from the interview.

As the Daily Caller News Foundation's Amber Athey points out, it sounds like "he wanted to speak off the record?"

So he wanted to speak off the record? very scandalous ?? https://t.co/qCySRrRsx7

"Anyway, like others have pointed out, it’s highly unlikely Kav told them they had to write he didn’t speak with them. Probably said you can’t say you spoke with me," Athey observes.

But all of this is pretty moot because there is "[n]o reason to trust the authors who have made it quite clear they’re just trying to justify their original f*ck up," she adds.

Indeed, you'd have to believe that Kavanaugh is a certified idiot to think it was a good idea to ask not-so-friendly reporters to lie for him. If I were a betting man, it sounds like the authors are just trying to add some juice to their pretty pathetic book.  If you want an actual truthful account of Kavanaugh and the conspiracy, then check out Regnery's "Justice on Trial: The Kavanaugh Confirmation and the Future of the Supreme Court" by Mollie Hemingway and Carrie Severino.
Share this on Facebook
Tweet
Nancy Pelosi Has Set a Date for the House to Vote on the Infrastructure Bill
Rebecca Downs