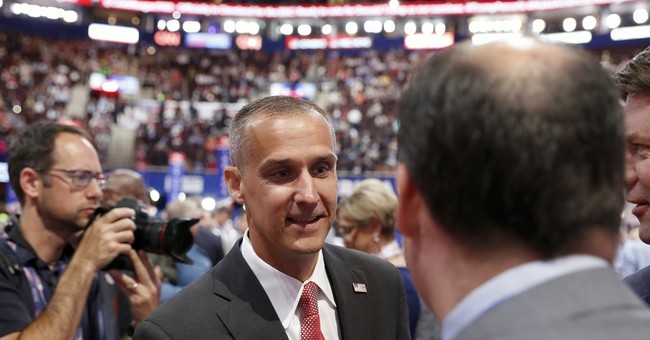 "I have been here my entire adult life. My children go to school here," Lewandowski told the Union Leader in an exclusive interview. "I’ve coached for all the sport teams my kids have been involved in. I could live anywhere, but I choose to live here because it’s the last island of low taxes, less government and limited regulation that I cherish, and I want to do all I can to help preserve that, including in 2020."

"I am taking a very long look at this race," Lewandowski told the paper. Prior to running President Trump's campaign, he acted as the Granite State's director for the Koch Network's Americans For Prosperity group.

His successor, Greg Moore, told the Union Leader that "he’ll go through the whole due diligence and do what’s best for his family, but I see Corey doing this."

Among points of contention for Lewandowski that his critics could seize on will most likely be Lewandowski's dust-up with reporter Michelle Fields in Florida during the 2016 presidential campaign. Fields claimed, and video later confirmed, that Lewandowski grabbed her arm to prevent her from asking a question to candidate Trump. Charges were dropped by local police after "there wasn't enough evidence to convict him of attacking a reporter at a rally last month," according to NBC News.

Regardless, Moore added that "[h]e’s fired up about it. He can bring a lot of energy, and the president’s organization will get behind him. There are very few who could instantly get into this race and be a big-time factor, but he’s one who can."

It should be noted the political "establishment" in New Hampshire, quite frankly, hates Lewandowski and everything he stands for.

"He’s a thug,” former  Republican U.S. Sen. Judd Gregg told the Union Leader. “He’s part of Trump’s cadre of thugs. If he were to run and become the nominee, it would be an outrage.”

According to New Hampshire's most influential newspaper, "Lewandowski shot back that Gregg was one of those 'career politicians' that destroyed the country and led to Trump’s election."

Despite never holding political office, Lewandowski is confident that he will have the financial backing needed to win the election.

He told Fox News last week, "If I decide to get into this race, I think you’ll see my fundraising prowess come to fruition very quickly."

2020 WATCH: @CLewandowski_ in an interview with @foxnewspolitics touts if he launches a U.S. Senate campaign in New Hampshire, "I think you’ll see my fundraising prowess come to fruition very quickly and will show I’m a very serious candidate." pic.twitter.com/CYdpIgviCR

President Trump will host a rally in Manchester, New Hampshire this Thursday but it has not been confirmed whether Lewandowski will join him on stage.