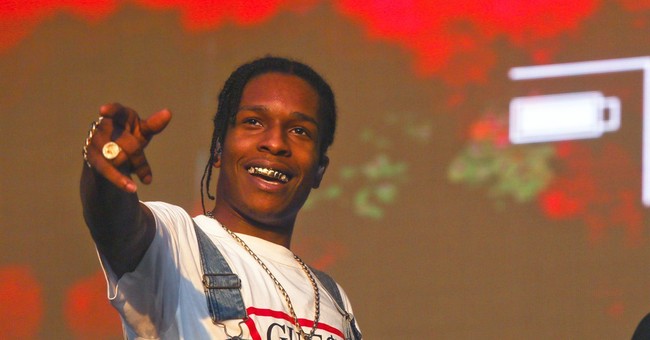 President Donald. J. Trump tweeted Friday afternoon that American rapper A$AP Rocky has been freed from Swedish custody and is on his way home to the United States.

"A$AP Rocky released from prison and on his way home to the United States from Sweden," the president tweeted. "It was a Rocky Week, get home ASAP A$AP!"

A$AP Rocky released from prison and on his way home to the United States from Sweden. It was a Rocky Week, get home ASAP A$AP!

The rapper has been in a Swedish jail for nearly a month after getting into a street altercation with a group following one of his concerts. A$AP Rocky, whose real name is Rakim Mayers, pled not guilty to starting the fight and said he simply acting in self-defense. He claimed the group had been harassing and threatening him and his posse the entire night. He was booked into jail and has been there ever since.

As Townhall has previously reported, celebrity couple Kim Kardashian and her husband Kanye West made appeals directly to President Trump to intervene in the case. They claimed that A$AP Rocky was being wrongly held by Sweden.

The State Department held meetings and conversations with the European nation. It appeared the Swedish government was going to reject the U.S.'s requests to release the American citizen and hold him indefinitely.

However, Rolling Stone reports that after three full days of testimony, the presiding judge on the case will announce his verdict on August 14.

Prosecutors and attorneys for A$AP Rocky and the two other defendants, Bladimir Corniel and David Rispers, delivered their closing statements today, bringing the trial to a close. After deliberating for an hour, the presiding judge announced that the verdict would be handed down at a later date. The judge also notably ruled that A$AP Rocky, Corniel and Rispers do not need to remain in custody until the 14th.

It is unclear at this time what extent the State Department had in the judge's decision.