Sign Of The Times: Seattle Adults Pay Money To Pretend To Be Children For A Day 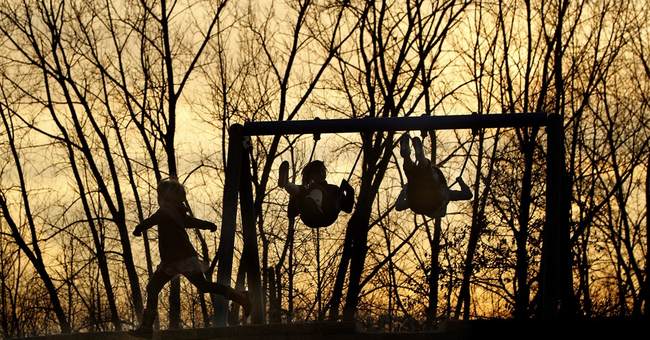 From the progressive city of Seattle comes an invitation for grown adults to regress back into childhood for a day at the park. On Saturday, August 3, Center Stage Event Marketing invites grown-ups to ditch their kids, forget their phones, and attend "Adult Recess" for a seven hour event where folks are welcome to act like they are a kid again.

"We wanted to create something that had a strong feeling, a strong theme, that anybody in the community could attend," said Clay Lundquist, managing director of CSEM. "We’re trying to invoke nostalgia."

The Seattle Times reports that portions of the event will benefit the Ronald McDonald House, but that the main purpose of the day is "to create an event that dropped attendees straight into their elementary-school playground — with the addition of beer. "

Likewise, "The event will go beyond the physical activities surrounding recess. There will be ’80s and ’90s music, and food trucks with childhood favorites — peanut butter and jelly sandwiches, mac and cheese, and ice cream."

Tickets are $20.00 per person. The Seattle Times article also mentions that there are similar programs for adults such as Camp Rahh.

via The Seattle Times:

"Camp Rahh, a four-day summer camp for adults, is a little less centrally located than the Capitol Hill-based Adult Recess. It’s on Samish Island, about 70 miles outside of mainland Seattle. The camp takes place every June and was designed to showcase Seattle’s backyard to its own residents."

"At camp there are no alcohol, no drugs and absolutely no technology. This means no phones, digital cameras and iPods. As kids you didn’t need those things — so you don’t need them at camp. At the end of the day people are looking for a connection, said Oh. So he did the best he could to facilitate that."

Far be it for me to judge how any grown adult spends his or her time. This is America and they can do whatever they want. But it is little concerning as a society that there are full-on camps for adults to pretend to be like children. Isn't there a responsibility for adults to not act like children, let alone pay to pretend to be one, so that the next generation can have role models? Furthermore, isn't this idea purely self-centered? Rather than take children, your own or other kids, to go and enjoy the wonders of life -- grownups are paying to play make-believe that they can simply shirk adulthood? Wouldn't it be better to experience "nostalgia" to teach boys and girls the games that you played growing up? Again, people can spend their money how they want to, but it sure seems like this is a defining mark of an unserious country filled with unserious people.