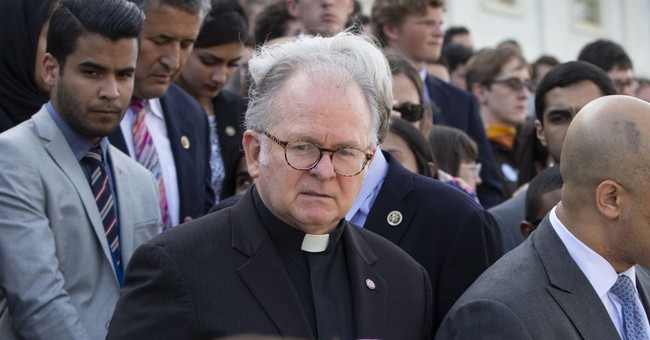 Reverend Patrick Conroy serves as the House of Representatives Chaplain in Washington, D.C. and regularly starts the day off for lawmakers with prayer. Thursday's invocation was a little more serious than most days for Rev. Conroy. The Roman Catholic Priest prayed specifically to cast out the demons inside Capitol Hill.

As reported by Fox News, Rev. Conroy said, "This has been a difficult and contentious week in which darker spirits seem to have been at play in the people’s House."

"Then, in a dramatic moment, Conroy raised both hands and said, 'In Your most holy name, I cast out all spirits of darkness from this chamber. Spirits not from You. I cast out the spirit of discouragement which deadens the hope of those who are of goodwill.'"

"I cast out the spirit of petty divisiveness which clouds the sense and the desire to be of fruitful productivity and addressing the issues more appropriately before this House," he prayed. "I cast out any sadness brought on by the frustration of dealing with matters detrimental to the honorable work each member has been called to engage in."

Rev. Conroy is a Jesuit priest, an order of the Catholic Church. He has been serving as House Chaplain since 2011. He attempted to resign in 2018, but, lawmakers on both sides of the aisle asked him not to. He withdrew his resignation.

Rev. Conroy told CNN he felt that he was being called to exorcise the demons away. "I was on the House floor on Tuesday and to me, it felt different than other days. It felt like there was something going on beyond just political disagreement. The energy of the House was very off. No one was relishing what was happening."