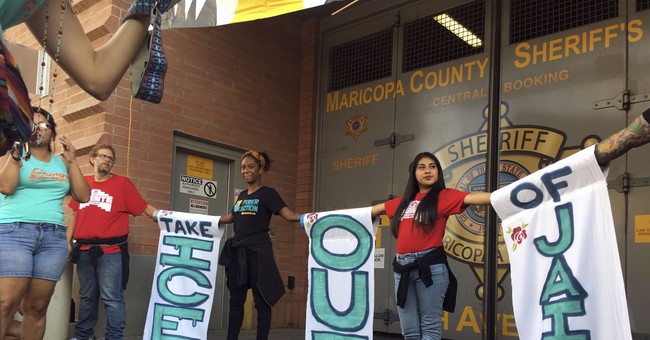 Who-woulda-thunk it, walls actually do work when trying to block people from entering a certain area of space. On Tuesday, more than 1,000 pro-illegal immigration activists alongside members of the group "Never Again Action" formed a human wall around government office buildings in Washington, D.C., blocking Immigration and Customs Enforcement agents from entering their workspace. Dozens were arrested as the demonstrators formed a human chain replete with chanting and the traditional left-wing moonbat antics against the American government.

Apparently, the group's main aim was to block ICE employees from doing their job unless the federal employees agreed to close down immigration detention centers which are housing thousands of migrant children and adults who have crossed the border into the country. The activists believe these facilities to be "concentration camps."

The demonstrators, several of whom were arrested Tuesday afternoon, were part of an event organized by Never Again Action, a Jewish activist group that’s been protesting outside ICE facilities around America, and Movimiento Cosecha, an organization fighting for undocumented immigrants. Their goal was to disrupt ICE’s daily work, and they surrounded the headquarters at 1 p.m., hoping to grab people getting back from lunch.

"ICE was blockaded for five hours, and video footage showed that the agency sent its employees home early." The Daily Beast adds.

Activists block the entrances to ICE Headquarters in Washington D.C. – yelling at employees who attempted to enter the building and even blocked traffic. | @annakooiman pic.twitter.com/6C45sqxg2j

ICE was forced to let employees home early and set up shop at a new location for the day because of the protest.