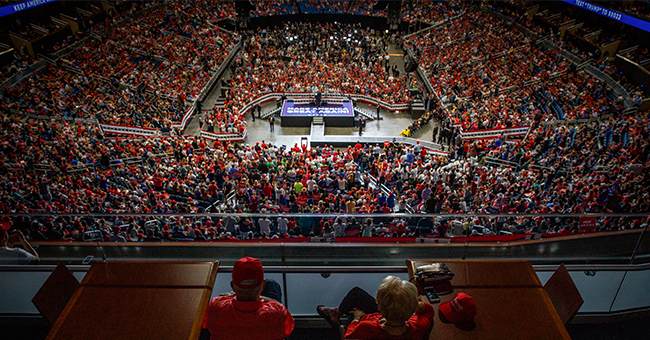 President Donald J. Trump launched his 2020 presidential campaign yesterday. As Katie Pavlich covered for Townhall, the raucous event included all of the Trump rally classics -- "CNN sucks!" chants, Hillary Clinton jabs, fan favorites like outgoing press secretary Sarah Sanders, and more. Prior to the rally, GOP Chairwoman Ronna McDaniel said that not a single Democrat today could come anywhere near the enthusiasm that Trump has from his supporters. The evidence so far suggests that she is correct. As video and photos have streamed in from the rally on social media, it is obvious that for President Trump's base, the man is absolutely a rockstar and is heading into 2020 with a possibly even more energetic crowd than he had in 2016.

Trump's entrance, as well as the full size of the crowd #TrumpRallyOrlando pic.twitter.com/1oNy33DXIT

Political strategist Caleb Hull posted a panoramic of the 20,000 seat stadium maximum capacity crowd which looks more like a college national championship football game than it does a political event.

Salem radio host and former advisor to President Trump, Sebastian Gorka, attended the rally and posted a video of Melania Trump's mere presence prompting a chorus of applause and an outbreak of "USA!" chants.

Check out the crowd.

Even outside the stadium was a wild time filled with tailgaters and more, watching on big screen TVs.

View from above of the large crowd down at 45 Fest ahead of President Trump’s campaign rally tonight at Amway Center. @MyNews13 @BN9 pic.twitter.com/yiln0yjSFb

Whatever your opinion of Trump, it is undeniable that his fans and supporters are loyal to him. They back this up not just with their physical presence, but their wallets as well. As Cortney reported, President Trump raised an astonishing and record-breaking $24.8 million from donors yesterday as he made his announcement.