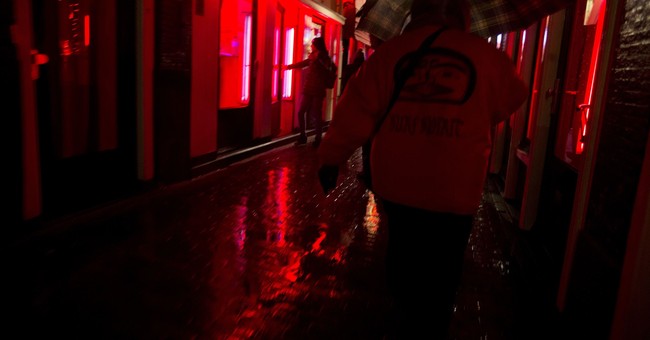 Teen Vogue, the online rag which markets itself as "the young person’s guide to conquering (and saving) the world," says that supporting the legalization of sex work -- aka prostitution -- is now the litmus test for intersectional feminism. The reason for this, argues Dr. Tlaleng Mofokeng is that since she is an expert in reproductive health  -- aka an abortion doctor -- that she advises her patients on sex and intimacy. She believes that this is no different than the core role of the prostitute. She is correct, but not for the reason she thinks.

"I do not believe it is right or just that people who exchange sexual services for money are criminalized and I am not for what I do," Dr. Mofokeng writes.

In her piece titled, "Why Sex Work Is Real Work," the doctor explains that Amsterdam, a city where sex work has been legal for years with its notorious "Red Light District," is now banning guided tours through those areas because city officials want to destigmatize the social taboo around prostitution.

"This situation in Amsterdam, and the continued criminalization of sex workers around the world, is yet another example of how we disregard the needs and opinions of the people most impacted by policies," Dr. Mofokeng remarks.

After explaining that not all sex work involves actually having sex and often includes other forms of intimacy, she compares this type of employment to being a doctor.

"I am a doctor, an expert in sexual health, but when you think about it, aren't I a sex worker? And in some ways, aren't we all?" she ponders.

"I find it interesting that as a medical doctor, I exchange payment in the form of money with people to provide them with advice and treatment for sex-related problems; therapy for sexual performance, counseling and therapy for relationship problems, and treatment of sexually transmitted infection," she continues. "Isn't this basically sex work?"

Readers should keep in mind that the online publication is targeted at mostly young girls trying to discover what they want to do with their life and how to live a quality life that will yield happiness. However, the purpose of this article is not necessarily to explain why being a doctor is just like being a sex worker. No, it seems the main argument from the author is that supporting sex work is now a feminist issue.

"Sex workers must be affirmed through upholding and the protection of their human rights to autonomy, dignity, fair labor practices, access to evidence-based care. It is for this and many other reasons that I believe sex work and sex worker rights are women’s rights, health rights, labor rights, and the litmus test for intersectional feminism," she says. ( emphasis added)

"If you support women’s rights, I urge you to support the global demand for sex work decriminalization, and fund evidence and rights-based intersectional programs aimed at sex workers and their clients," the author argues.

Dr. Mofokeng's assertion that you must support legalizing prostitution in order to support women is yet the latest deviation from most people's understanding of feminism. As I've previously covered, for many leftists feminism now means supporting purely left-wing causes, which is why some women, like the conservative pundit and Townhall contributor Allie Beth Stuckey, opt to not identify as a feminist.

In a video that is now a few years old, Stuckey explained, "I don't want to share a label with women who tell me that I can't fight for women's equality and want to protect unborn children."

However, in a certain sense, Dr. Mofokeng is correct that being an abortion doctor and a prostitute are similar in how they view sex and the purpose of sex. In short, prostitutes view sex and the intimate love that comes with it as a commodity that can be purchased. Abortionists view babies as a commodity to be discarded. Both "jobs" reduce the human body to nothing more than a utilitarian pleasure trove and makes the human being, both the worker and the aborted child, no different than a sex toy or unwanted leftovers tossed in the garbage disposal. Again, to paraphrase Stuckey on the topic, if that is now the litmus test for feminism, the left can keep the label.