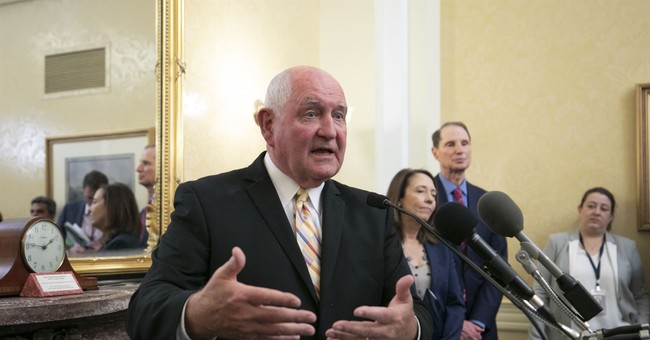 Imagine being told to do an assignment by your boss and instead of following orders or having a conversation about why you cannot complete the job, you simply stood up and turned your back on him. You would probably be fired, right? Well, not if you work for the federal government. Yesterday, a group of federal employees literally stood up and turned their backs on Secretary of Agriculture Sonny Perdue after being told they would be relocated to Kansas.

The Hill reports that Sec. Perdue "announced Thursday that two of the Department of Agriculture’s research agencies, the Economic Research Service (ERS) and the National Institute of Food and Agriculture, will be relocated to be closer to major farming regions."

In response, the employees expressed their dissatisfaction by treating Sec. Perdue like a misbehaved dog and shunning him.

The Department of Agriculture claims that the move will save taxpayers $20 million per year as well as advance other necessary initiatives by having the employees closer to farmers and those impacted by the department.

However, critics of the relocation say that the plan is a politically motivated effort by President Donald J. Trump to stifle internal criticism and findings which could harm his administration. The employees also claim they were given no notice of the relocation until just prior to the announcement. The employees, who opted to unionize after the announcement, were supposedly given their reassignments yesterday and now have 30 days to decide whether or not they will continue working for the department.