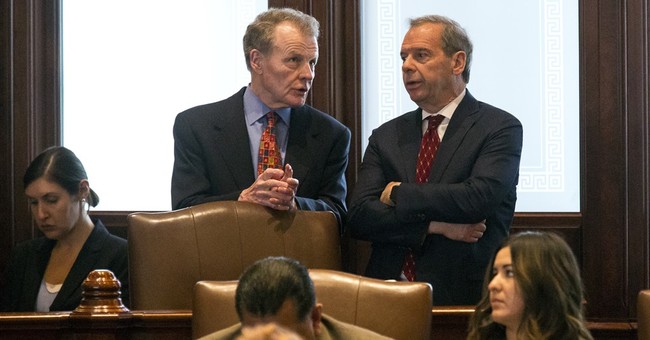 Springfield, Illinois Catholic Bishop Thomas Paprocki enforced the teaching of the Church this week by barring two Catholic elected state officials from receiving Holy Communion until they have first gone to confession, repented, and have made amends for their "grave sin" of promoting and passing the recent radical abortion law known as Reproductive Health Act.

“In accord with canon 915 of the Code of Canon Law...Illinois Senate President John Cullerton and Speaker of the House Michael J. Madigan, who facilitated the passage of the Act Concerning Abortion of 2017 (House Bill 40) as well as the Reproductive Health Act of 2019 (Senate Bill 25), are not to be admitted to Holy Communion in the Diocese of Springfield in Illinois because they have obstinately persisted in promoting the abominable crime and very grave sin of abortion as evidenced by the influence they exerted in their leadership roles and their repeated votes and obdurate public support for abortion rights over an extended period of time,” Bishop Thomas Paprocki wrote in a June 2 decree according to the Catholic News Agency.

“These persons may be readmitted to Holy Communion only after they have truly repented these grave sins and furthermore have made suitable reparation for damages and scandal, or at least have seriously promised to do so, as determined in my judgment or in the judgment of their diocesan bishop in consultation with me or my successor,” Bishop Paprocki continued.

The legislation expected to be signed by the Illinois governor enshrines abortion as a fundamental right and one the state can interfere with only in the rarest of circumstances. Catholic Church teaching says that abortion is never allowed under any circumstances.

As other state legislatures have passed similar laws allowing essentially unlimited abortion, Catholic clergy and laymen alike have called for the Church to stop allowing elected leaders to receive communion if they support abortion. For example after New York Gov. Cuomo, a Catholic, signed the state's recently passed abortion law, Monsignor Pope of Washington, DC wrote it "is time to end the charade, even the lie, that Andrew Cuomo and others like him are Catholics in good standing. They are not, and this must be made plain to them and to others. Join me in praying that Bishop Scharfenberger and other bishops in New York with jurisdiction will do what is right and necessary.”

Cuomo, despite previous actions which should have resulted in consequences from the church, is still allowed to receive communion. In order understand how serious it is for a Catholic to be barred from receiving communion otherwise known as the Eucharist, deceased Venerable Bishop Fulton Sheen explains that if "a man must be born before he can begin to lead his physical life, so he must be born to lead a Divine Life. That birth occurs in the Sacrament of Baptism. To survive, he must be nourished by Divine Life; that is done in the Sacrament of the Holy Eucharist." Catholics believe communion is literally the body and blood of Jesus Christ and is intrinsically necessary for a relationship with God.