3 Catholics Killed In Another Church Attack In Burkina Faso 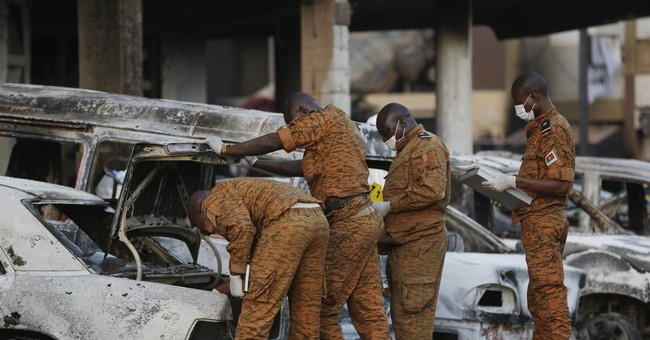 Islamic extremist terrorists killed 3 more Catholics in the former French colony of Burkina Faso as gunmen continued the series of attacks on Christian targets this morning.

The French Press Agency reports that "heavily armed individuals attacked the church... as the faithful were celebrating Sunday mass," according to their security source.

The nation is two-thirds Muslim and one-third Christian and has been dealing with escalated terror attacks dor quite some time. Just last week, drive-by shooters killed 10 Catholics, including a priest on Saturday and Sunday.

However, since 2016, Al-Queda militants and other branches of Islamic extremism have killed hundreds of people. Just this year, 196 people have been killed by terrorists. But as reported by the New York Times, these terrorists also attack fellow Muslims who do not hold the same extremist ideology as they do.

The terrorists appear to have shifted their goals from stoking conflict between farmers and herders to inducing a similar divide between Muslims and Christians, Burkina Faso’s president, Roch Marc Christian Kaboré, said recently.

“These terrorists have reorganized their way of operating,” Mr. Kaboré told a conference of Christian leaders in the capital, Ouagadougou, on Tuesday, according to local news reports.

“They have developed their mode of operation,” he said, “seeking first to create an intercommunity conflict, and today an interreligious conflict.”

“That is why they proceeded with violence committed against the Muslims who are not of the same opinion as them, and now the other religions,” on local journalist told the New York Times. “They want to create widespread chaos.”

But, Burkina Faso is not going alone in their fight against these terrorists. According to the French Press Agency, "France has deployed 4,500 troops in Mali, Burkina Faso, Niger and Chad in a mission codenamed Barkhane to help local forces flush out terrorists," among other international efforts.