Opinion: Of Course Conservatives Care About Celebrities In Politics 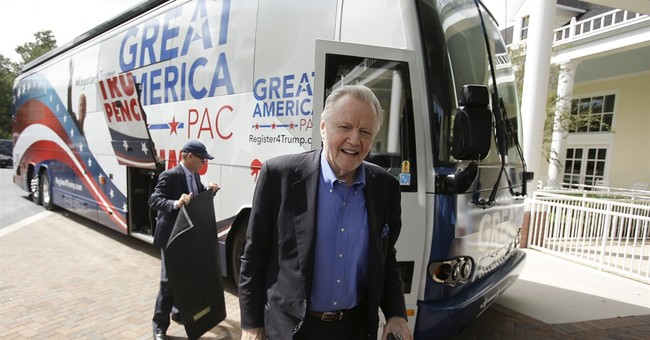 Hollywood actor Jon Voight released a two-part video via Twitter last night, heralding President Trump as "the greatest president since Abraham Lincoln," and one who is "battling the Left and their absurd words of destruction." The message was poignant and, while the claim of President Trump's actual ranking amongst presidents since the Civil War could be debated for hours, it was largely one the Republican Party and conservatives needed to hear. In short, it could serve as a call for Republicans to get out, get moving, and start knocking on doors lest we want a leftist president to win in 2020. But, it is also a reminder that despite claims from conservatives that we do not care what Hollywood has to say, we actually do appreciate when a celebrity or actor offers support for the Grand Ol' Party.

"People of the Republican Party, I know you will agree with me when I say our president has our utmost respect and our love. This job is not easy, for he is battling the left and their absurd words of destruction. I've said this once, and I'll say this again, that our nation has been built on the solid ground from our forefathers and there is a moral code of duty that has been passed on from President Lincoln," Voight said in the video.

He continued, explaining why President Trump has been such a great leader for the country. "I'm here today to acknowledge the truth and I'm here today to tell you my fellow Americans that our country is stronger safer and with more jobs because our president has made his every move correct don't be fooled by the political left because we are the people of this nation that is witnessing triumph so let us stand with our president," the onetime Academy Award and four-time Golden Globe winner said in the video.

Finally, he ended it by saying, "Let us stand up for this truth that President Trump is the greatest president since Abraham Lincoln. God Bless America and may God continue to guide this nation, much love."

To be clear, it is a bold move in Hollywood -- an industry where actors are blacklisted from jobs for daring to think non-leftist thoughts -- to come out in such strong support for any Republican, let alone President Trump. But, consider the treatment of previous celebrities vs. the praise of Jon Voight by conservatives. Just last year, Fox News' Laura Ingraham slammed Lebron James by saying "shut up and dribble" after he criticized the president. After the left flung bogus claims of racism towards Ingraham, she rightfully defended her statements by saying, "Hey Lebron, I'm an equal opportunity critic and that she has "used a variation of that title for more than 15 years to respond to performers who sound off on politics." For instance, she told "Robert DeNiro to ‘Shut Up & Act,’ Jimmy Kimmel to ‘Shut Up & Make Us Laugh,’ and just this week told the San Antonio Spurs’ Gregg Popovich to ‘Shut up & Coach.'"

Of course, these people are all left-wing celebrities spouting nonsense that generally promotes big government and policies which would harm the country. The American public would be better off by ignoring their political advice. These individuals would be better off using their athletic, comedic, and acting talents to inspire the nation, not dictate government. While Ingraham has not commented on Voight's video yet, other conservatives on Twitter have praised him for it and have welcomed the celebrity influence that he brings. The same thing happened amongst conservatives when Kanye West voiced his support for President Trump and commentator Candace Owens.

And we should welcome that influence. If politics is downstream from culture, as the late Andrew Breitbart often said, conservatives should encourage more celebrities like Voight to speak their mind on the subject. This is not to say necessarily politics needs to be explicitly inserted into every movie, tv show, song, and piece of entertainment. It is to say that the right needs more celebrities to support conservative ideas publically. Voight is correct that the future of the country is in better hands under President Trump than it would be under a leftist president. But, it is time conservatives stop pretending we do not care what Hollywood has to say. Of course we do, and we would be stupid to cede this cultural environment to the left forever.