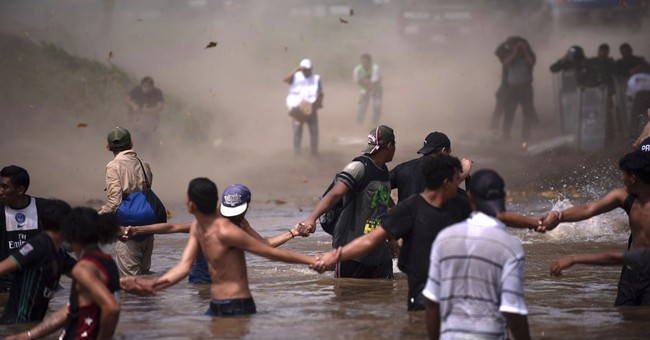 This weekend The Washington Post ran a story titled, "The Stay Here Center." The premise of the story is "A U.S.-funded school gives young Guatemalans job skills to find success in their own country." The question of the story is, "Will it keep them from migrating north?" But the answer to that question remains unclear because, despite United States taxpayers spending thousands on this school and millions more on similar programs, nobody is keeping track of whether or not these programs actually deter illegal immigration.

As reported by The Washington Post, "The Stay Here Center is funded by the U.S. Agency for International Development and the Guatemalan government in an attempt to stem the flow of migrants from Guatemala." Posted in the school are signs in Spanish warning of the dangers of traveling to America as well as guest lecturers who encourage students to stay in Guatemala. There are classes intended to teach skills such as cutting hair, so that young Guatemalan citizens seek work in their home country.

But, do these initiatives work?

As noted by the Post President Trump recently threatened to cut funding, such as the "hundreds of millions of dollars each year on programs such as the Stay Here Center, aimed at improving the lives of would-be migrants in their own communities so they don’t leave home in the first place," to Central American nations who do not stop illegal aliens from leaving.

The Post then says "Development experts and diplomats called the move self-defeating: Cutting programs aimed at curbing migration would only increase the flow of migrants."

However, two paragraphs later, the paper contradicts itself by stating "It’s unclear whether this four-year-old school is helping. The school doesn’t maintain reliable metrics on its success at keeping students from migrating, and neither does USAID. Analysts have questioned whether any development program can effectively change migration patterns. Teachers here say students at the Stay Here Center leave all the time, abruptly setting off for the United States."  (emphasis added)

The Stay Here school itself has received just $20,000 over the last two years. But, teachers say 1 out of 10 students leave. Again, the piece notes that there is no way to tell whether or not this means the school is successful.

The taxpayer-funded agency, USAID, "says it does not keep track of the center’s results — the federal agency relies on the International Organization for Migration for oversight." But, the "IOM says it has not tracked the school’s impact on local migration trends."

Anecdotal evidence would say it is arguably having the opposite effect. Many students say the key reason they go to school is to learn English and other useful skills o travel north.Even the mayor's son wants to get out of town:

At the Stay Here Center, the students are aware that the skills they’re acquiring will be particularly useful if they migrate.

“I always ask them why they want to learn English and what use do they have for it,” Quintana said. “They say if I go to the United States, I would like to communicate.”

At a recent class, Quintana asked, “Is there anyone here who would like to go to the States?”

Every hand went up.

“But who wants to go in a truck so that they deport you?” she asked.

“If that’s the only option, then that’s fine,” Abdiel Dionisio said.

Quintana shook her head and laughed. She didn’t know at the time that Dionisio was the mayor’s son.

A few students who admit they will stay and work in their hometown, abruptly say but if it does not work out they know how to find the smuggler. These smugglers charge $12,000 per head. Experts note that illegal aliens are able to send much more money back from the United States to their families than they ever could by earning here. Some Guatemalans note in the article that it is obvious which neighbors have relatives working from the United States and sending remittances because their quality of life is that much nicer.

The piece ends by noting that those running the school, such as English teacher Silvia Quintana mentioned in the prior blub, have no idea what would happen if their school shut down. "If the school were to shutter, it’s impossible to know how much more likely they would be to migrate — or whether migration would be good or bad for them."

This Washington Post report confirms a 2015 warning from the Government Accountability Office. Under President Obama, similar methods of deterring illegal immigration in Central American countries -- education programs, jobs programs, warning signs -- actually had the opposite effect intended and led to the 2014 surge of child migrants entering the United States.

At the time, the GAO said, “ineffective campaigns could lead to higher levels of migration to the United States, which is not only potentially costly in terms of U.S. taxpayer resources but costly and dangerous to the migrants and their families.”

Today, immigration officials say the United States is at a "breaking point" and  "a border influx that is on pace to be the largest in more than a decade, led by Guatemalan and Honduran asylum seekers who arrive with children and surrender to U.S. agents."

President Trump has given Central American nations one year to address the flow of illegal immigration while continuing to use taxpayer dollars to fund programs, like the Stay Here Center, that the GAO has already found to be ineffective.